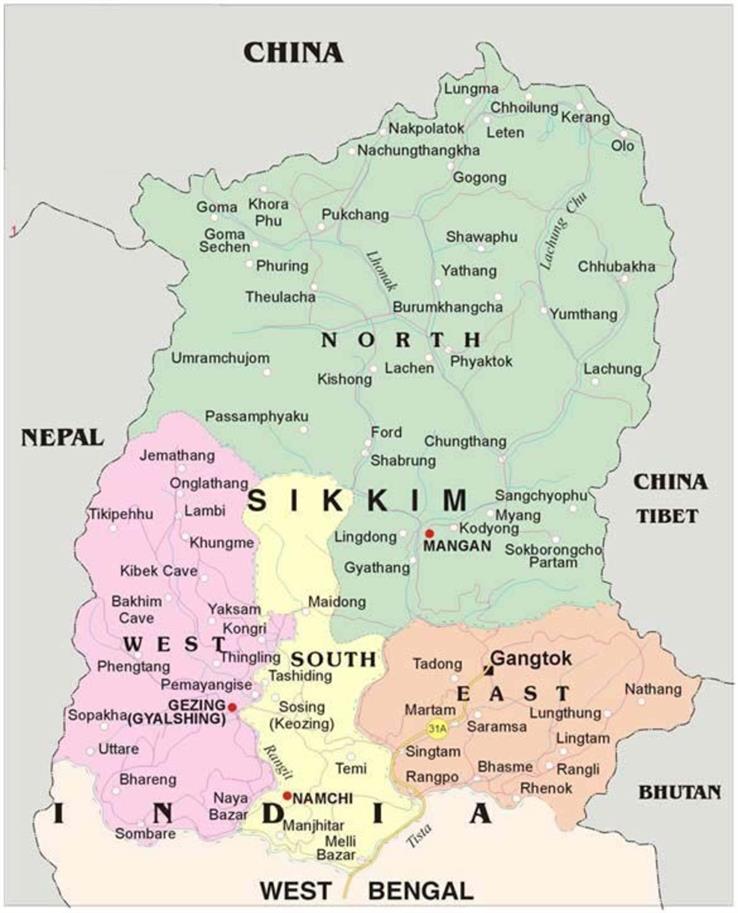 Sikkim - The Untouched Beauty of Nature

To witness the untouched beauty of nature, Sikkim is the best option to explore. Nestled in the foothills of the Himalayas, Sikkim is the second-smallest state and is inhabited from 27 to 28 degrees latitude in the north and 88 to 89 degrees in the east.

Despite being India's second-smallest and least populous state, Sikkim is a paradise for those who love nature. Situated in the northeastern part of the country, Gangtok is the largest city of Sikkim and is also the capital of the state. The city of Gangtok is located at an altitude of 5,500 feet on Shivalik hills. The total area of ​​Sikkim is about 7,096 sq km. ‘Kanchenjunga,' the third highest mountain peak in the world, lies on the border of Nepal in the northwestern part of Sikkim. The geographically small state of Sikkim is renowned for its animals, waterfalls, rivers, lakes, plants, and mountains. It is the most attractive state of India, which is full of sublime natural beauty, magnificent mountains, beautiful waterfalls, and some fantastic landscapes.

For those who love mountains, Sikkim is no less than a paradise. Many areas in Sikkim are mountainous and have a height ranging from 280 m to 8,585 m. One can be tempted by showing a glimpse of the scenic view of hilly areas. Sikkim, the North East state of India, is worth-seeing. Some of the best places to visit in Sikkim are as follows:

Thangu Valley, the hub of tourist attractions, is one of the most beautiful valleys of Sikkim, which is 30 km north of Lachen town. Trekking can also be done at places like Green Lake around Thangu. Between March to June is considered the best time to visit Thangu valley.

Lachung is a beautiful village close to the Tibetan border. During snowfalls, its beauty increases to such an extent, that its picturesque can make anyone in awe. That is why there is a flow of tourists from all over the world.

A beautiful and mesmerizing Gurudongmar Lake is one of the divine lakes of the state, which is situated 190 km from Gangtok. The lake is at an altitude of 17,800 feet above sea level.

Located in the north district of Sikkim, Yumthang Valley is also known as 'Sikkim Valley of Flowers sanctuary.' It is a beautiful place, full of rivers, hot springs, and yaks with grazing pasture.

Dwelled in the lap of the eastern Himalayas, Mangan is counted among a worth seeing tourist spot in the country. Mangan has a number of tourist spots, one of which is Shingba Rhododendron Sanctuary. It is home to forty species of rhododendron trees. Singhik is the village of Mangan, situated at an altitude of more than 500 feet, from where one can take a view of Kanchenjunga.

Banjhakri Falls and Energy Park in Gangtok is an extraordinary sightseeing place for tourists, which is spread over two acres of area. Energy Park has a swimming pool for tourists to enjoy.

It is considered as a historical place, which is located at a distance of 17 km from the northern capital of Gangtok. This place with amazing historical stories attracts tourists.

Either March and May or October and mid-December is the best time to visit Sikkim due to its pleasant weather during these months.

Sikkim is a state where you get food that resembles many ingredients, styles, and elements of Nepal, Bhutan, Tibet, and India. The cultures and religions around it inspire the cuisine found in this state. For food lovers, Sikkim is famous for traditional Himalayan cuisine. Rice is the principal food of Sikkim. Also, many well-known restaurants serve non-vegetarian Indian, Tibetan, Nepali, Chinese, and Italian dishes. Dumpling (Momos) is on the top of the list of famous cuisine of Sikkim. Other mouth-watering cuisines of Sikkim include Thukpa, Phagshapa (Gya Thuk), Dhindo, Dal Bhat, Sha Phaley, Gundruk, Sinki, etc.

The citizens of Sikkim celebrate all major Hindu festivals of India, such as Makar Sankranti, Durga Puja, Ram Navami, Diwali, and Dussehra. Losar is considered as one of the main festivals of the state. Lhabab Duchen, Pang Lhabsol, are other important festivals of the Sikkim.

Losoong Festival is a major festival of Sikkim, celebrated at the end of the tenth month of the year according to the Tibetan Lunar calendar. During this festival, people pray for a good harvest and excellent prospects in the coming year. Losoong Festival is celebrated every year in the month of December. It is the New Year of the Sikkimese Bhutia tribe. Losar Festival is celebrated in the month of February as the Tibetan New Year. Yak dance is very popular in this festival, and a procession is also taken out in it.

How to Reach Sikkim

Despite being a hilly region, Sikkim is very well connected to the entire country. The Sikkim Tourism Department also operates a five-seater helicopter from Bagdogra to Gangtok as it is a favorite destination of tourists. Two railway stations connect this province to the rest of the country, one Siliguri and the other New Jalpaiguri, which are 114 km from the capital and 125 km, respectively.

Sikkim does not have an airport of its own. The nearest airport is Bagdogra (near Siliguri) in West Bengal, which is located about 125 km from Gangtok, the capital of Sikkim. The state is connected to Kolkata, Delhi, and Guwahati by several airlines such as Indian Airlines, Deccan Air Service, Jet Airways, and others.

Though Sikkim is situated in the lower part of the Himalayas, there is an extensive network of roads. Sikkim can be reached through the northern part of West Bengal. Darjeeling, Kalimpong, and Siliguri are directly connected to Gangtok and other cities in the state, where on the other hand, frequent landslides in the monsoon cause temporary problems in road transport.

There is no rail network in Sikkim. The nearest railway station is New Jalpaiguri (near Siliguri) in West Bengal, which connects several major cities in the Northeast, including Gangtok. Apart from this, it is well connected to all the major railway stations in India - Kolkata, Delhi.

History of the State

The history of Sikkim goes back to the time when the Lepchas were the original inhabitants of this state. Sikkim has a special political past in which several important events have taken place related to the tribal rulers, British power, and the joining of this state in India. When the British arrived in India, the dynasty of Sikkim formed an alliance to fight against Nepalese and Bhutanese, who was becoming a threat to Sikkim. After India gained independence in 1947, Sikkim became a protected state under India, and India took responsibility for its defense, foreign relations, and strategic connectivity. However, over time, the people of Sikkim wanted more political freedom through democracy, then the first five elections were held in 1975.

People of all communities in Sikkim live in mutual love and goodwill. Sikkim has people belonging to different religions and is the state of communal harmony and most peaceful in the Indian Union.

Sikkim is the second smallest state in India and is geographically located at 27.33 degrees north and 88.62 degrees east. The Himalayan Range surrounds Sikkim from eastern, western, and northern borders. It borders West Bengal in the south, Tibet in the north and northeast, Nepal in the west, and Bhutan in the east.

The north part of the state has a tundra type of climate, while the southern part has subtropical seasonal conditions. Due to the tundra type climate, the northern part of the state is covered with snow for about four months of the year, and the night temperature goes up to zero degrees. The weather of Sikkim is mainly of five types, which include Summer, Winter, Spring, Autumn, and Monsoon.

Sikkim has a population of 6.19 lakhs, with a total literacy rate of 81.42%. Out of which the males and female literacy rate of the state is 86.55% and 75.61%, respectively. There are only two religions widespread in Sikkim, Hinduism and Buddhism. Though there is also a small Christian community which was of Lepcha origin at first, later converted to religion by the colonial British. There are even fewer Muslims than them. In spite of having many religions and sects in different proportions, there has never been tension or communal riots in the state.

The economy of Sikkim rests exclusively on tourism, farming, some industries, and horticulture. Due to its rich natural beauty, attractive weather, and rich cultural heritage, tourism has flourished in this part of the country and has become the backbone of Sikkim's economy.

Despite most of the area of ​​Sikkim being covered by mountains, farming is possible to a large extent. Sikkim is particularly rich in tea and cardamom, besides other crops include rice, maize, potato, wheat, orange, and ginger.

The government of Sikkim adopted the structure of other states of India in 1975 after being separated from its dynastic roots. There is a legislative body with many ministers headed by the Chief Minister. In the state legislative assembly, 32 members are elected through assembly elections in 32 assembly constituencies spread over four districts. One of these seats is reserved for a Buddhist representative according to the tradition of kings. The Chief Minister of Sikkim is Prem Singh Tamang serving since 2019.

Sikkim lags behind other states in India in terms of education due to the mountains and lack of facilities. There are around 1150 schools which are providing primary and secondary education to children. More than half of these are run with the help of the government and the rest by private institutions. Some schools belong to the Central Board. There are about 15 colleges in the state that impart higher education to aspiring students. There are other private universities like the Sikkim Manipal University of Gangtok, which offer degrees in engineering, management, and medicine. Sikkim Central University is also located in Gangtok.

The cultural heritage of Sikkim is vibrant and prosperous due to the mixed tradition of Lepchas, Hinduism, and Buddhism. Apart from this, the state of Sikkim mainly consists of people from the Bhotia, Lepcha, and Nepali communities. Since the people of Sikkim follow Buddhism, their festivals are less grand and plain but colorful. Buddhist festivals such as Drupka Teshi, Saga Dawa, Lusong, Pang Lhabsol, and Dasen are widely celebrated in the state. Folk songs and dances are ubiquitous in such ceremonies. The masked dance performed by the Lamas in the courtyard of the monastery in Sikkim is the most colorful dance in North-East India, which shows the true essence of the culture of the place.

People living in the state use a total of six languages ​​for communication. Nepali is the common language here due to a large number of Nepali people. This language belongs to the Indo-Aryan family. The second most spoken language is Bhutia, which has strong ties to the Tibeto-Burman family. Other languages, ​​which people speak fluently are Lepcha, Sherpa (spoken language), and Limbu (spoken language). All these languages ​​are taught in various schools and are declared as the official language of the state.

Sikkim, the second smallest state in India, is situated between Tibet, Nepal, and Bhutan. The hills, green forests, ponds, and rivers make Sikkim an excellent destination for the holidays. Apart from this, there are many places to shop in Sikkim, which can add some extra charm to the beauty of the state.

Lastly, the state of Sikkim is mostly a maze of plunging, super-steep valleys with an attractive, natural, and cloud wrapped places that refreshes the hearts and minds of the tourists. 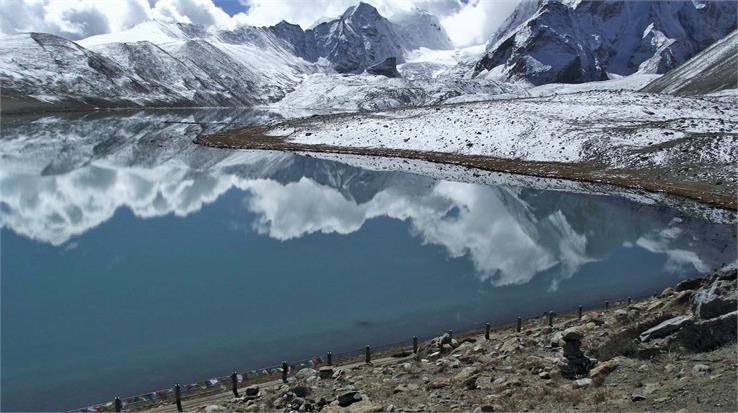 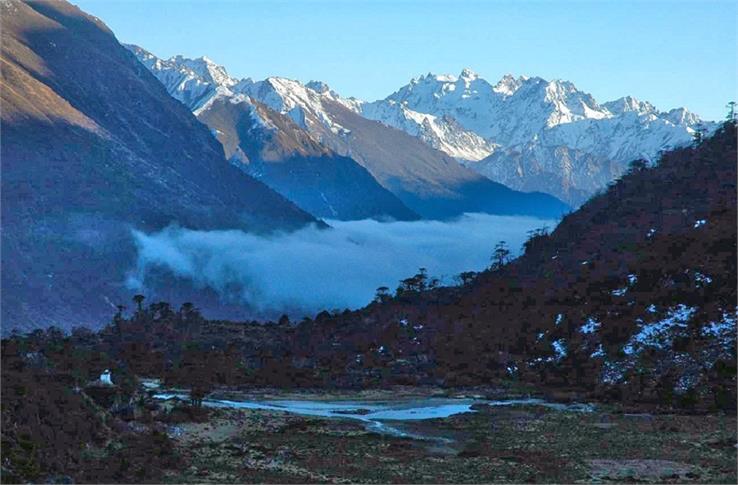 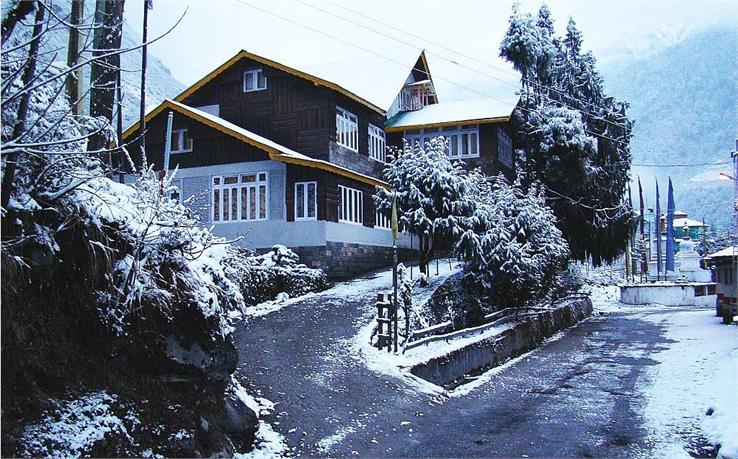 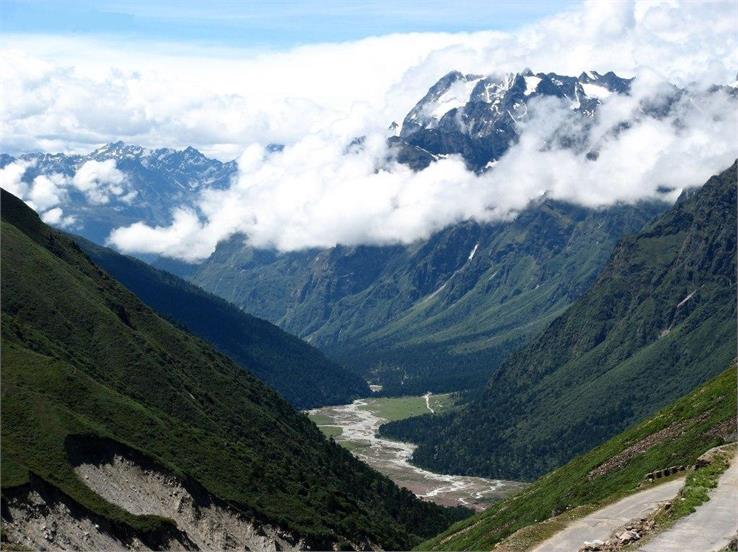 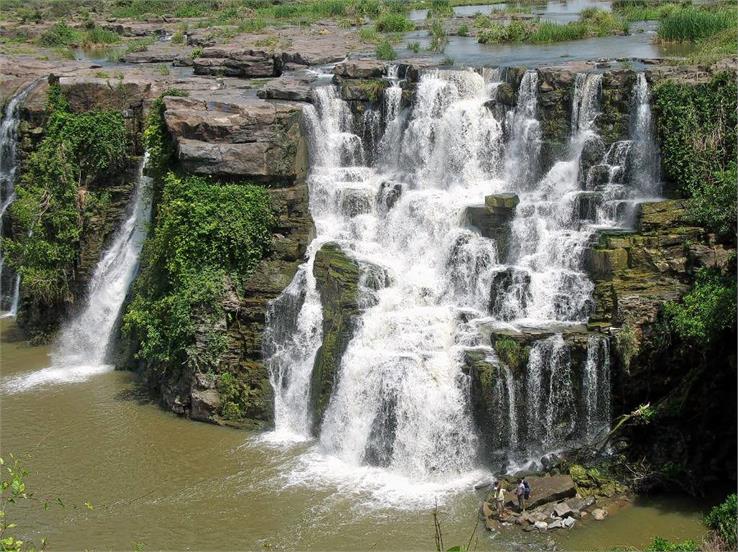 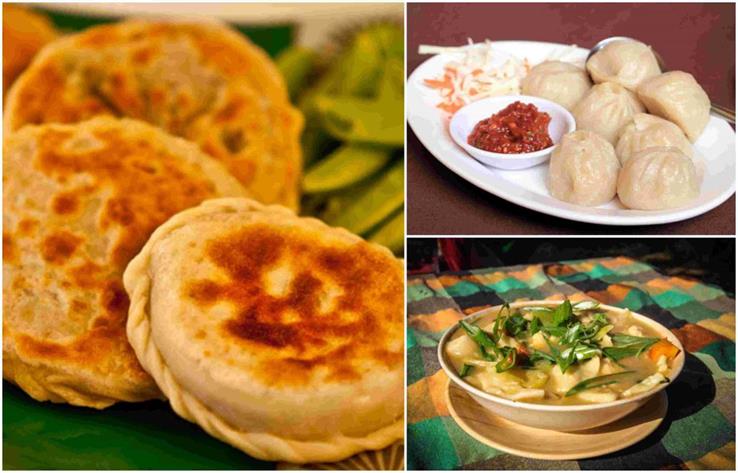 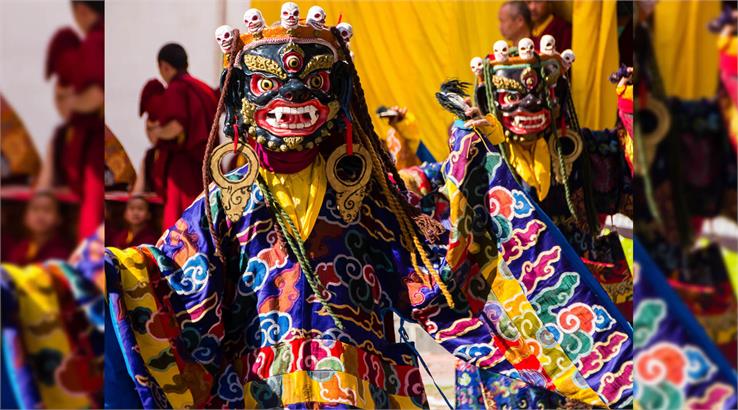 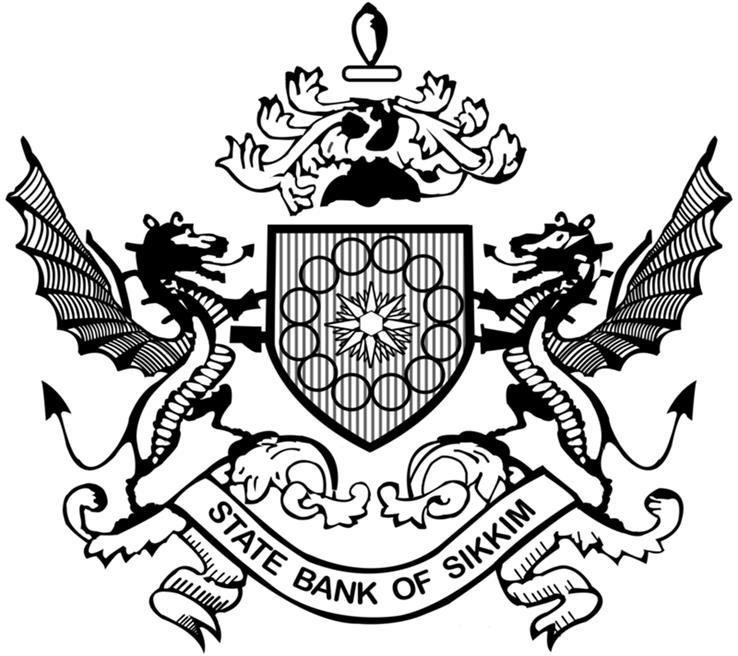 source: Holidify
We appreciate! Thank you. 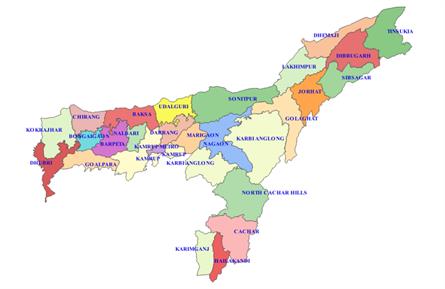 Assam: A Gateway to North-East…

The sovereign state of India, Assam is popular for its natural beauty and… 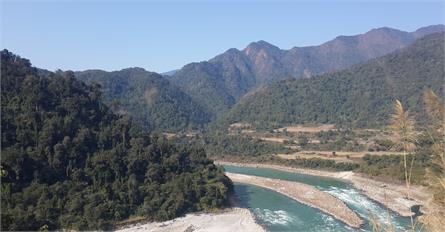 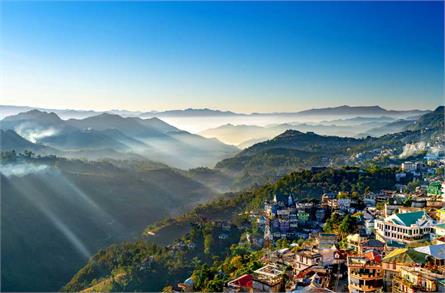 Mizoram - The Land of Hills

Mizoram, popularly known as 'the land of hills,' is a beautiful state… 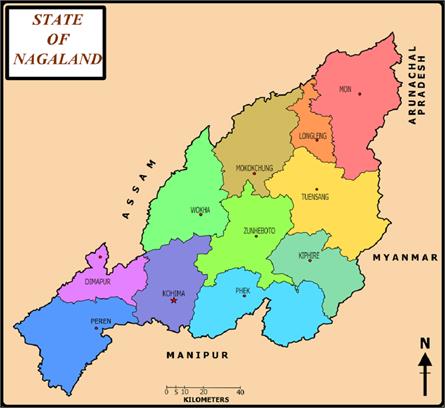 Nagaland - The Switzerland of…

The Switzerland of the East, Nagaland is a beautiful state of India which… 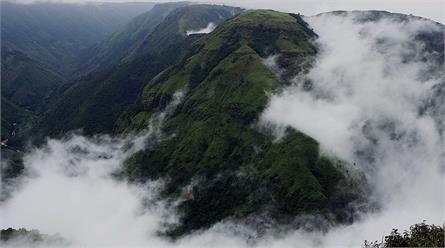 Meghalaya - An Abode of…

Meghalaya is a state in north-eastern India, which is surrounded by…