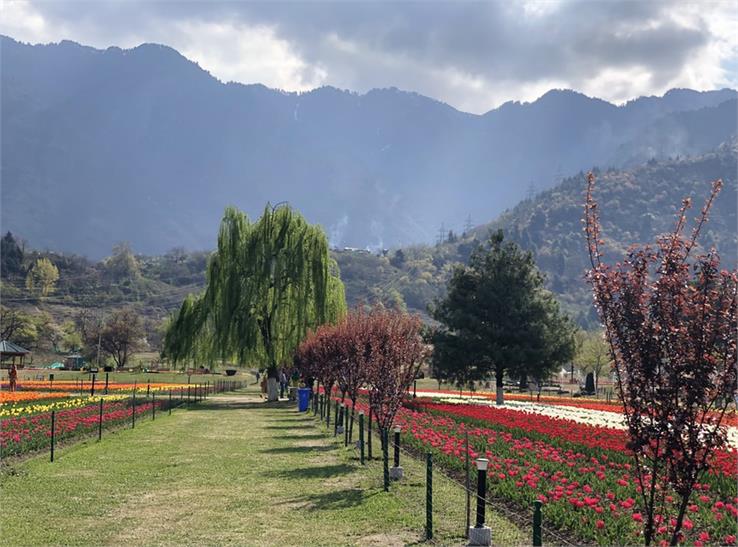 Jammu and Kashmir - The Crown of India

Keep your first step in Jammu and Kashmir, and this quote gets justified itself. Feel the serenity of nature, the strength of the vast Himalayas, the snow, the chilled lakes, the bridal beauty of the Shikaras (special boats decorated with flowers), the orchards, and the pure breezes taking your heart away!

Located in the Himalayan mountains and shares a border with the states of Himachal Pradesh and Punjab to the south, Jammu and Kashmir is a beautiful state in northern India. It also shares its international border with China in the north & east. With the Line of Control, which makes it separate from the Pakistan controlled territories of Azad Kashmir and Gilgit–Baltistan on the west side and northwest side as well.

The state holds the special autonomy under Article 370 of the Indian constitution. Being a part of the erstwhile Princely State of Kashmir and Jammu, this part is always the principal subject of a territorial conflict among the neighboring countries of India including China and Pakistan. The western districts of the former princely state are famous as Azad Kashmir, and the northern territories are well-known as Gilgit-Baltistan, which have been under Pakistani control since the year 1947. The Aksai Chin region, located in the east, bordering Tibet, has also been under Chinese control since the year 1962.

Jammu and Kashmir consist of three beautiful regions that are Jammu, the Kashmir Valley, and Ladakh. Srinagar is competitively famous as the summer capital, whereas Jammu is the winter capital. On top of it, the Kashmir valley is famed for its serene and beautiful mountainous landscape, and Jammu's various shrines attract a large number of Hindu pilgrims every year. And last but not least, Ladakh is also known as "Little Tibet," and famous for its incredible remote mountain beauty and Buddhist culture. Jammu & Kashmir is the only state in India which has a large Muslim-majority population.

In the year 1925, Hari Singh moved the throne of Kashmir upwards and was the one who reigns the monarch at the end of British rule in the subcontinent in the year 1947. One of the conditions of the partition of India imposed by Britain is that the rulers of such princely states shall have the right or option to choose Pakistan or India as a country or remain independent. In 1941, Kashmir's population was around 77.06% Muslim, 20.46% Hindu, 1.37% Sikh, 1.01% Buddhist, and 0.10% were under an unspecified category.

On 22 October 1947, locals and tribesmen were supported by Pakistan invaded Kashmir. In the starting, the Maharaja fought back bravely but appealed for guidance to the Governor-General Louis Mountbatten, who got agreed on the situation that the ruler accedes to the country. Maharaja Hari Singh had signed the Instrument of Accession at that time on 26 October 1947 in return for all the military aid and better assistance, which was approved by the Governor-General of India Lord Mountbatten the next day. While the Indian Governor-General Lord Mountbatten also approved the accession, it added the provision that it would be submitted to a significant referendum since "only the people, not the Maharaja, could decide where Kashmiris wanted to live." It was a provisional accession.

After signing the Instrument of Accession, Indian soldiers entered Kashmir with orders to evict all the raiders. India took this matter to the United Nations. The UN resolution raised the issue and handled it sensibly by asking both India and Pakistan to vacate the respective areas they had occupied and held a proper referendum under the strict UN observation. This referendum by the United Nations, which India initially supported well, was rejected by India or after that, because in 1952, the Constituent Assembly of Jammu and Kashmir was elected, so the voters voted to ensure that Kashmir region enters India.

The diplomatic relationship between India and Pakistan soured for many other reasons. It eventually concluded in three further wars in Kashmir the Indo-Pakistani War of the year 1965, the Indo-Pakistan War of the year 1971 and the Kargil War in the year 1999. India has control of around 60% of the area of the former Princely State of Jammu and Kashmir that includes Jammu, Kashmir Valley, and Ladakh. Pakistan controls approximately 30% of the region (Gilgit–Baltistan and Azad Kashmir). China also occupied 10% of the area (Aksai Chin and Trans-Karakoram Tract) of the state in the year 1962.

Jammu and Kashmir is the abode to various valleys that is famous as the Kashmir Valley, Tawi Valley, Chenab Valley, Poonch Valley, Sind Valley, and Lidder Valley. The Himalayas separated the Kashmir valley from Ladakh. On the other side, the Pir Panjal range encloses the valley from the west, and the south divides it from the Great Plains of northern India. Along with the northeastern flank of the valley, it runs the main range of the Himalayas as well. This densely well-settled and amazing valley has an average height of almost 1,850 meters (6,070 ft) above sea-level. Still, the surrounding Pir Panjal range has an average elevation of around 16,000 feet.

Due to the extensive range of elevations, Jammu and Kashmir's biogeography is diverse and attractive. Northwestern thorn scrub forests and Himalayan subtropical pine forests are found in the little low elevations of the far southwestern area. These elevations give way to a broad and wide band of western Himalayan broadleaf forests running from the northwest-southeast area all across the Kashmir Valley.

Jammu and Kashmir's economy is wholly dependent on agriculture and all the allied activities. The Kashmir valley is famous for its sericulture and also the cold-water fisheries. Wood from Kashmir is famous for making high-quality cricket bats, which is popularly known as Kashmir Willow. Kashmiri saffron is also very famous, and it brings the state a considerable amount of foreign exchange. Agricultural generally exports from Jammu and Kashmir, which includes apples, rice, peaches, pears, barley, cherries, corn, millet, oranges, saffron, sorghum, vegetables, and wheat, while manufactured exports involve handicrafts, rugs, and shawls.

Horticulture plays a vital role in the total economic development of the state, with an annual turnover of over ₹3 billion apart from foreign exchange of over ₹800 million. This sector is counter as the most significant source of income in the state's economy. The region of Kashmir is well-known for its horticulture industry as well as the wealthiest region in the entire state. Horticultural also produce from the state, such as apples, apricots, cherries, pears, plums, almonds, and walnuts.

The Doda district has total deposits of high-grade sapphire. Though small, the manufacturing and all the services sector is growing swiftly, especially in the Jammu division. In recent years, few of the consumer goods companies have opened their manufacturing units in the region as well.

The tourism economy in the Kashmir valley was earlier the worst hit. However, the sacred shrines of Jammu and the Buddhist monasteries of Ladakh continue to be a leading pilgrimage and tourism locations. Every year, a large number of Hindu pilgrims visit Jammu to visit the sacred temples of Vaishno Devi and Amarnath, and they have an essential role in the economy of the state. The contribution nowadays would be much more now as the large numbers of visitors have immensely increased as compared to earlier.

Besides Kashmir, the Jammu region itself has a lot of tourism capability. There are various places in Jammu, which are worth seeing. Bhau Fort in Jammu city is considered as the dominant attraction center for the tourists who are visiting the city. Bage-e-Bahu is another well-known tourist destination. The aquarium, which was established by the fisheries department, is also being visited by many tourists these days. Jammu is majorly visited by the travelers from India as a pilgrimage to Mata Vaishno Devi. Almost 10 million Pilgrims visit this holy destination every year.

Tourism in Kashmir valley has been rebounded in recent past years. In the year 2009, the state became one of the top tourist destinations of India and thousands of visitors chose Kashmir as the favorite destination. Gulmarg which is one of the most popular ski resort destinations in India is also known as the home to the world's highest green golf course. However, lessening in violence in the state has now boosted the state's economy and tourism.

Places Worth Visiting in J&K

Ladakh is well-known for its unique and different kinds of Indo-Tibetan culture. Chanting in Sanskrit, as well as the Tibetan language, forms an integral part of Ladakh's Buddhist lifestyle. Masked dance festivals, weaving, and archery are counted as essential parts of traditional life. Ladakhi food has so much in common with Tibetan food. The most prominent food of Ladakh is thukpa, noodle soup, which is also known in Ladakhi as Ngampe or roasted barley flour. Typical garb, which includes gonchas of velvet that is embroidered waistcoats and boots, with the gonads or hats. People usually embellished with gold and silver jewelry and turquoise headgears all throng the streets at the time of Ladakhi festivals.

The Dumhal is a popular dance form in the Kashmir Valley. Men of the Wattal region perform this dance form. The women here play the Rouff that is another traditional folk dance. Kashmir has been signified for its fine arts for so many years, including poetry as well as handicrafts. Shikara, traditional small wooden boats, and beautiful houseboats are a common feature as well as an attraction in all the lakes and rivers of the valley.

India's constitution does not give the permit to people from regions other than Jammu and Kashmir to buy land in the state. As a result, houseboats are famous for those who were unable to purchase property in the valley and now become a significant part of Kashmiri lifestyle.

Kawa that is traditional green tea with spices and almond, is consumed by the people all through the day in the chilly winter climate of the valley. Most of the buildings in the Valley and Ladakh are generally made from softwood and are well-influenced by Indian, Tibetan, and Islamic architecture also.

Jammu's Dogra culture and tradition are very much familiar to that of neighboring Punjab and Himachal Pradesh states. Traditional Punjabi festivals like Lohri and Vaisakhi are celebrated with great zeal, and enthusiasm throughout the entire region, along with Accession Day. It is an annual holiday which commemorates the accession of state Jammu & Kashmir to the Dominion of the country.

Highly notable educational institutes or research institutes in Jammu and Kashmir state are:

University-level education is also offered by:

Sports such as cricket, football are very much famous along with other sports like golf, skiing, water sports, and adventure sports. Srinagar is the destination to the Sher-i-Kashmir Stadium. Many of the international cricket matches have been played in this stadium.

Srinagar has an outdoor stadium named as Bakshi Stadium for hosting football matches. The stadium got its name after Bakshi Ghulam Mohammad.

The city has a famous golf course named Royal Springs Golf Course. This golf course is located on the banks of Dal lake. It is considered one of the best golf courses in the country.