Almora - the Cultural Capital of Kumaon

Almora is a municipal board and cantonment town in Almora district, Uttarakhand. It is also the administrative headquarters of Almora district. It is located on a crescent-shaped mountain ridge of about 5 km long, at the southern edge of the Kumaon Hills of the Himalayan range. It lies at a distance of 365 km from the national capital New Delhi and 415 km from Uttarakhand’s capital city Dehradun.

Almora is mostly known for its cultural diversity, a bewitching hill station with mesmerizing beauty all around. It has a unique identity as it’s one of the few hill stations that were not discovered by the British.

Even though the town is a little more urbanized with a north Indian influence than other hill stations, the natural beauty surrounding it makes up for every loss. It is also known as a town of temples. Slowly and gradually, Almora has proved itself as a great influence on the state by being an agricultural base and a great trade center.

Almora was named after a short plant found in the nearby region called Kilmora. The plant was used to clean the utensils of the sun temple at Katarmal. The people who brought the Kilmora plant were called “Kilmori”, which was later transformed into “Almori.” The influence of Almori people helped in naming the town as “Almora.”

Before the 16th century, most of the region of Almora was under the control of Katyuri king Bhaichaldeo, who then donated a part of it to Sri Chand Tiwari. By mid-century, during the rule of the Chand dynasty, King Kalyan Chand founded and established Almora separately.

As per some legends, Almora was home to Tewari, whose job was to supply Sorrel to the sun temple at Katarmal on a daily basis. Ancient accounts claim the presence of primordial accounts of human settlements in the city in Vishnu Purana and Mahabharata. Tribes like the Sakas, the Nagas, the Kiratas, the Khasas, and the Hunas are credited to be the most ancient tribes living in Almora. The next family to acquire the area was the royal family of Kauravas and Pandavas of the Hastinapur. The end of Mahabharata war left the district under the sway of the kings of Hastinapur for some time. However, it is believed that kings of Hastinapur were just nominal ruler, the area was actually ruled by the local chiefs of whom the Kulindas (or Kunindas), who were strong in the southern and western part of the city. The next influencers were the Khasas, who belonged to an early Aryan race and were widely scattered in those times. They named this region Khasadesha or Khasamandala.

The next influencers, the Katyuris, were recorded as the most dominant clans in copper and stone engravings. The next ages went into rivaling each other for supremacy and dominance. As a result, the Chand dynasty overtook their inception in 953 A.D. till their ouster in the late 18th century. The era of Chand dynasty led to a saga of conflict, along with horrifying series of wars with rulers of Garhwal, destruction of this prosperous land and establishment of inglorious Gurkha rule. By the end of the 17th century, Chand again attacked the Garhwal kingdom, and in 1688, King Udyot Chand erected several temples at Almora to mark his victory over Garhwal and Doti. The Parbateshwar temple was renamed twice and ultimately became the present Nanda Devi temple.

In 1791, the Gorkhas of Nepal invaded and overran Almora in the process of expanding their kingdom westwards across the Kali River. The British got engaged in preventing the Gorkhas from over-running the whole of the northern frontier but the Gorkha ruled successfully for next twenty-four years. As a solution to their continuous intrusion into British territories in the Terai from 1800 onwards, the Governor-General of India, Lord Moira, ordered an attack on Almora in December 1814, igniting the Anglo-Gorkha war. The 1814 war marked the defeat of the Gorkhas and led to the signing of the Treaty of Sugauli in 1816. As per the treaty, Nepal had to return all the territories which were annexed by the Gorkhas to the British East India Company.

Being one of a kind, Almora is one of the rare hill stations which were founded and developed before British annexation.

The climate of Almora remains moderate throughout the day. Being in the northern part of India, the climatic conditions of the town tends to vary in different seasons of the year.

Summers: The summers last from the month of May to June, in Almora. The temperature ranges from 11°C to 17°C. The atmosphere remains sunny and clear, giving you enough light to wander and explore.

Monsoon: The monsoon season lasts from July to October in city. The temperature ranges from 13°C to 15°C. It is very likely to rain and the area remains cloudy in the morning.

Winter: The winter season lasts from November to January in Almora. The temperature ranges from 6°C to 8°C and can go down till 1°C to make it snow. You can experience delightful snowfall during this time.

Spring: the spring season lasts from February to April in Almora. The temperature ranges from 6°C to 11°C. The atmosphere remains pleasant and clear, giving you a maximum vision and a better view of the lush green vegetation.

The best time to visit Almora is between April to June and September to November. If you’re more inclined towards snow views, then you should visit in early summer and autumn.

Almora has a rich collection of 4000 species of plants. The flora of this region can be classified into tropical, Himalayan sub-tropical and subalpine and alpine vegetation. The alpine and subalpine zones are considered as the most natural abode of the largest number of medicinal plants.

Best Places to Visit in Almora

The nearest airport from Almora is Pantnagar, which is 120 km away. You can reach your destination by taxi.

The nearest railway station from Almora is Kathgodam (87 km away). 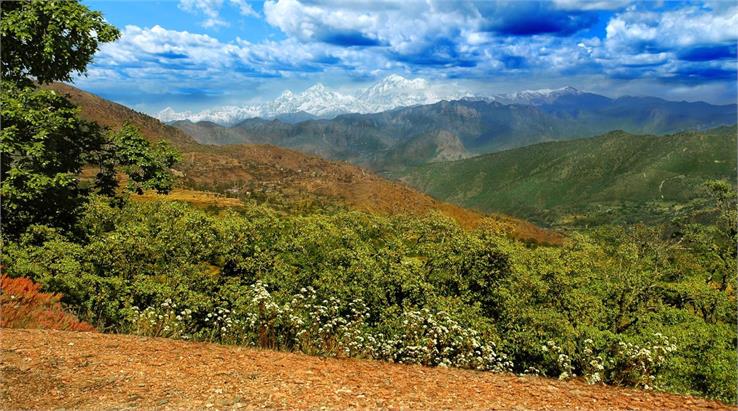