If you are experiencing the sight of exotic beaches, beautiful flora, rare fauna, and an oozing beauty of nature at every blink of your eye, then you are definitely in Andaman and Nicobar islands. A group of 572 islands, but only 34 are the permanent habitats or say eligible for humans to live. It is one of the seven Union Territories of India lying at the juncture of the Bay of Bengal and the Andaman Sea.

10ºN latitude passes between the two islands where the latter lies at the North, and the former lies at the South of the imaginary divisor. Port Blair is the capital of the territory and is an Andamanese town.

There is no evidence of initial human settlement in the Andamans and Nicobars, but according to anthropologists, some stone-tool crafters have lived here for 2000 years.

The history of Andaman and Nicobar islands is a fascinating one as many dynasties and empires came, ruled, and vacated the lonely islands giving different names to them and adding many exciting chapters to the history of these little specks in the ocean.

First appeared the Chola dynasty! As a ruler of the islands, the Tamil King – "Rajendra Chola" conquered the Andaman and Nicobar islands and used these as a naval base. The new name given to the island was "Tinmaittivu," which means impure islands in Tamil.
Then came Marathas in the 17th century and used the islands as temporary maritime ship-base.

Danish East India Company came into the picture on 12th December 1755, and they declared the islands as Danish Colony on 1st January 1756 and gave the islands a new name, "New Denmark." Still, as time passed by, they decided to change it into "Frederick's Islands. "

From 1778 to 1784, Austria made a colony on the Nicobars and renamed them as Theresia Islands.
British rulers didn't leave behind either and made a naval and penal base on the islands in 1789. However, they vacated the territory after a while. In 1858 they again appeared and established a colony here. The people who raised their voices against the "British Raj" or criminals from the Indian Subcontinent were sent here for imprisonment in the Cellular Jail included in the British Colony, and they named it as "Kalapani."

WORLD WAR 2nd brought the Japanese as controllers of the islands practically, but nominally the territory was under the authority of Arzi Hukumate Azad Hind of Netaji Subhash Chandra Bose. He visited the islands and renamed them "Shaheed Dweep," which means Martyr Island and the "Swaraj Dweep" or the self-ruled island.

When India got its independence in 1947, this broken chain of Andaman and Nicobar Islands became the part of India in 1950, and in 1955 it was declared as one of the seven Union Territories of India.

The Andaman and Nicobar Islands is a group of 572 small islands and islets. The total area covered by these islands is about 8,249 km2 or 3,185 sq m. Where the Andaman comprises 325 islands, and the Nicobar has a group of 247 islands having an area of 6,408 km2 and 1,841 km2, respectively. It lies at the articulation of the Bay of Bengal and the Andaman Sea.

Beautiful weather, mostly rain throughout the year, amidst the sea, are some of the features that make these islands an attractive flora and fauna.

There are approximately twenty-two hundred (2200) varieties of plants and flora, which have been recorded to date, but it is believed that much is still unknown to mankind.

Deciduous forests are found in Harbor Middle Andaman, a lot of ferns and orchids can be seen in the forests of South Andaman. Forests in North Andaman are evergreen, while North Nicobar is experiencing this type of scarcity.

Forests account for about 87% of the total area of the islands, so one can imagine what an amazing diversity of flora the islands must-have.

This atypical forest coverage is made up of twelve types, namely:

The Andaman Wild Boar and it’s variety in both the islands, namely Sus Scrofa andamanensis and Sus Scrofa nicobaricus are the endemic species, 26 species of Rodents are found. Bats are also a majority say 14 different species, Saltwater Crocodile, and the State animal of Andaman “Dudong” or the Sea Cow are some of the variety of fauna found in the islands.

About 270 species of colorful birds and 225 species of moths and butterflies are found here; a few of them are very large and extraordinary.

A tropical climate, never letting you forget that you are exploring an island with humidity more than 80%. The temperature fluctuates between 23 ºC and 31 ºC. In the month of November, the North East monsoons and in the month of May, southwest monsoons occur and balance the weather as not too chilly in winters and not extremum hot in summers. Thus, these islands are beautiful and worth visiting around the year.

The monsoons occur mostly all around the year. The island surrounded by water from all sides; the weather in Andaman and Nicobar remains moderate all through the year. It’s never too hot or too cold.

A nature lover should visit here between May to December to experience the lush green surroundings and waterfalls, while divers are suggested to travel between the months of December and April.

One should visit the islands in winter to hear the chirping of birds and to see birds.

Why Andaman and Nicobar is Worth Visiting?

Veer Savarkar Airport is pleasing. The entire airport can be seen from an aesthetic point of view, and there is no night flight. The airport is fully used and controlled by the Indian Air Force. Flights from within mainland India are the only route to reach Andaman and Nicobar Islands. Airways like JetLite, Go Air, Air India, and Spice Jet are some of the airways that offer flights from Delhi, Kolkata or Chennai to Port Blair.

One can board the ship from Chennai, Kolkata or Visakhapatnam to Port Blair. The ghats take about five days, and one should always keep in mind that the Bay of Bengal is not always calm. The Shipping Services Directorate is run by the government and runs to the Indian mainland. It operates two separate ships:

Auto Rickshaws and taxis are available in Port Blair and Havelock Island. One can avail Scooters and Motorcycles on rent as well.

The economic growth of Andaman and Nicobar depends upon its agriculture, industry, and tourism.

The territory has around 1,374 small scale village and handicrafts industries which are registered.

Andaman and Nicobar are also becoming a favorite tourist place. It’s mesmerizing beaches, beautiful sea views, museums, National park, and many other tourist spots are attracting people from and outside India, which is acting as a helping hand in the economic growth of the territory.

The peaceful islands, though apart from the mainland of India, have a reliable educational system and a literacy rate of 86.27% under the census report of 2011. The islands lack behind in offering very high education but afford to provide some professional and notable courses maintaining their quality. There are schools affiliated to the C.B.S.E board boasting their excellent infrastructure. Some schools educate the students free of cost who are below the poverty line.

Professional Courses and Their Centres

The Union Territories of…

In the Republic of India, when their respective governments rule states,…

Excitement and fun have another name; Jolly Buoy Island or the… 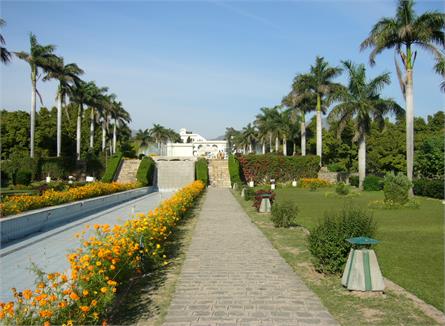 The first planned city of Independent India, aristocratic and cosmopolitan,…