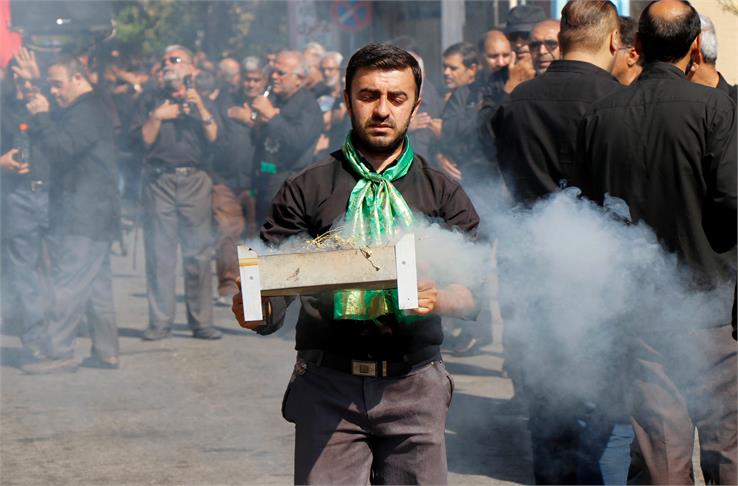 The Day of Sacrifice - Muharram

The month of Muharram is of great religious significance to the followers of Islam. It is considered to be the holiest month for Muslims. The word 'Muharram' derived from the word 'haram", which means forbidden. Hence, any violence is forbidden in the month of Muharram.

On the 10th day, Ashura holds great importance between both sects of Muslims- Shias and Sunnis. When Asuras are considered a day of mourning among Shias, it is celebrated as a festival.

Large Muslim processions can be seen on the streets of India on the day of Ashura, i.e., the 10th day of Muharram. Cities such as Hyderabad, Delhi, Mumbai, Kolkata play host to large Shiah mourning processions. Shia Muslims take part in huge rallies and cover the streets in mourning the death of Hussain ibn Ali. Hussain ibn Ali is the grandson of the Islamic prophet Muhammad, who was brutally killed in the Battle of Karbala on the tenth day of Muharram in 61 AH (680 AD).

The Muslims believe in the Islamic calendar, which is a lunar calendar. It is 11 to 12 days shorter than the regular solar year that is used in the western nations. When compared with the Gregorian calendar, a solar calendar, the lunar month of Muharram shifts from year to year.

According to the Quran, any fight is forbidden in the four months-Muharram, Rajab, Dhu al-Qi' dah, and Dhu al-Hijjah, of the year. The brutal battle of Karbala was aimed against this law and tradition of Islam. The inhabitants on the banks of rivers Euphrates and Tigris were traditional rivals. Their actual bitterness was contained to some extent by Muhammad. When Muhammad's son-in-law Hazrat Ali became the Caliph (Muslim civil and religious leader considered being Allah's representative on earth), the old rivalry was reborn.

Hussein was the ruler of part of the empire that has now developed into modern-day Iran, and the other part, modern Iraq, was ruled by the Umayyads. To bring the war to a conclusion, the Shiahs of Kufa (a small town in the Umayyad kingdom) called Hussain to accept their allegiance and become the leader of the Islamic community. This proposal was sent against the wishes of the ruler of Kufa, Yazid, who then instructed his governor, Ibn-e-Ziad, to take appropriate action. Meanwhile, Hussain, along with his family members, already left for Kufa. On their way to Kufa, the forces of the governor surrounded them and their troop of 70 men in Karbala. Hussain, his family, and his troops were brutally tortured and killed, and Hussain's severed head was presented to the king. No one from the Shiahs of Kufa came forward for help.

What do Muslims do in Muharram?

As the tragic death of Husayn Ibn Ali happened on the 10th day of Muharram, Shiah Muslims consider it a day of sorrow. They keep themselves away from music or any joyous event for the duration of ten days to devote themselves to complete mourning. Many Shiah Muslims observe fast for the first nine days of Muharram and attend Majalis (assemblies), where Shiah orators narrate the incidents of the martyrdom of Hazrat Imam Hussain and his party.

As the day of Ashura approaches, they wear mourning-black clothes. On Ashura, devoted Muslims take out large processions. They encourage people to join the parade holding banners and models of Hazrat Imam Hussain and his party, who sacrificed their lives in Karbala. Some sects of the devotees express their grief and mourn by beating themselves with chains in public, cutting themselves with knives and sharp objects. On this sad occasion, everyone in the procession chants “Ya Hussain” loudly.

At some places, a white horse is decorated & included in the procession as a memory of the empty mount of Hazrat Imam Husain after his martyrdom. People of the Shiah community set up drinking posts to serve free water and juices to everyone in need.

The Perspective of Sunni Muslims

The other sect of the Islamic community - Sunni Muslims - observes Muharram as a festival and considers Ashura as a happy day. Sunnis devotees keep a fast (Roja) on Ashura as per the Hadith (a tradition based on reports of the sayings and activities of Muhammad and his companions) of Prophet Muhammad.

According to the Hadith, Prophet once saw the Jews fasting on the 10th of Muharram to commemorate their liberation from Egyptian slavery and the extermination of the Pharoah army in the Red Seawater. Prophet Mohammed was astonished by this custom, as he believed that it was Allah who saved the Israelites from their Egyptian enemies. He planned to fast on the same day as the Jews but 9th and 10th from the following year. But before he could commemorate this custom, he fell ill and ultimately succumbed to his illness. Since then, Sunni Muslims took forward this tradition and recommended to fast either on the 9th and 10th of Muharram or on the 10th and 11th of Muharram.