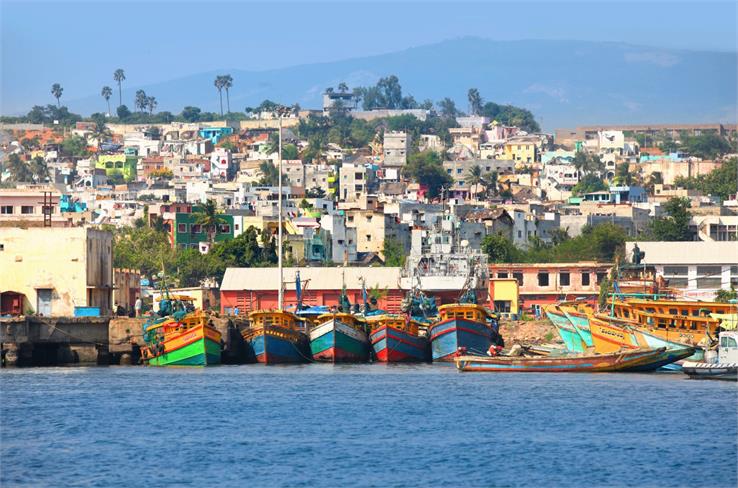 Visakhapatnam - The Jewel of East Coast

The sacred place of worship of God Visakha, built in the 4th century by the king of Andhra Pradesh, gave the name "Visakhapatnam" to the city.

Visakhapatnam was said to be a part of the Kalinga region in the 6th century BC. It was later ruled by the Vengi kingdom, Eastern Ganga, and the Pallava dynasties. The city present today is said to be built around the 11th and 12th centuries CE according to the archaeological studies and their records. In those days the Chola dynasty and the Gajapati dynasty used to rule the city fluctuating. Then in the 15th century came the Vijayanagara Empire followed by the Mughal dynasty as the Mughals conquered the previous ruler in the 16th century. European powers slow and steadily started taking interest in setting up trade in the city and gradually the city came under French rule by the end of the eighteenth century. British started ruling the city from 1804 until the proud moment when India got its independence in 1947. After the country got its freedom Visakhapatnam grew and developed and eventually became India's one of the chief ports.

Being the tenth largest economy among all the cities in India it has a Gross Domestic Product of USD 26 Billion. Visakhapatnam supports raising the economy of the state by contributing its services in trade, heavy industries, fishing, information technology, tourism, etc. Occupying the fifth rank as the busiest port in India in terms of handling the cargo the city also plays the role of the headquarters for Eastern Naval Command of the Indian Navy and has the oldest shipyard which is the only natural harbor on the eastern coast of the country.

Some of the places of tourist attraction are mentioned below:

Borra Caves: Lies in the hills of Ananthagiri in Akaru Valley on the East Coast of India. The caves are the karstic limestone structures with lots of stalactites and stalagmites of different shapes and sizes.

Kurusura Submarine Museum: This is a huge submarine turned into a museum, which is the first museum stadium in South-Asia. It is located on the Rama Krishna Beach in Visakhapatnam.

Simhachalam Temple: Also called Simhadri temple, it is located in the suburb of Simhachalam in the state. It is a Hindu temple dedicated to Lord Narasimha.

Yarada Beach: It is located on the West coast of the Bay of Bengal in Yarada village.

Kailasa Giri Park: Developed by Visakhapatnam Urban Development Authority, this park is a hilltop park. The height of the hill is 360 feet above sea level from where the sight of beautiful beaches and forests of the city melts the heart.

Indira Gandhi Zoological Park: As the name says it all, this zoological park was named after Mrs. Indira Gandhi, 625 acres area of the property covers in the remembrance of the former prime minister of India. Surrounded by the Eastern Ghats from three sides, the zoo has about 850 numbers of animals and about 75 different species.

Ramakrishna Beach: This beach is named after Rama Krishna Mission Ashrama, which is located across the Beach road in front of the Ramakrishna beach. It is a famous beach as the Kursura submarine museum is also located on this beach.

Araku Valley: A beautiful hill station located in the Eastern Ghats is the home for different tribes. The valley is famous for its coffee plantations. Because of its mesmerizing scenic beauty, it is a favorite shooting destination for many Tollywood directors.

Katiki Falls: This waterfall fascinates those who are fond of adventures as this is a 7 km ride from a point which is 1 km before the Borra caves, and it involves crossing through a jungle, climbing, trekking and a lot more fun. Local taxi drivers take you to these falls from that point in their rugged jeeps as luxury cars are not suitable for crossing the narrow, muddy and bumpy roads.
Bamboo chicken (chicken kebabs cooked inside a bamboo trunk) is a famous dish that is available in the local shops here. One can get pure natural honey, as well.

Bheemunipatnam Beach: A serene place that is so quiet and unexplored by the rush of people or tourists. It's in Bheemunipatanam town.

Matsya Drarshini: Maintained by the municipal corporation of Vizag, Matsya Darshini is an aquarium for the public to view a variety of rare aquatic species. It is located near RK Beach on the beach road.

Padmapuram gardens: These gardens are located in the Araku Valley. It attracts tourists as it has a variety of appealing flowers and plants which can be viewed riding on a Toy Train, which welcomes you at the entrance of the garden. Children enjoy the train ride too!

Kondakarla Bird Sanctuary: Located at 40kms from Vizag, this bird sanctuary has a wide variety of rare bird species. Bird watchers are recommended to go and visit this place in winter.

Gangavaram Beach: It is said to be India's deepest port. It is located where the river Borramma Gedda meets the sea.

Kondakarla Ava Beach: Cradled at the foothills of Eastern Ghats, this beach is famous for its beauty, greenery, and serenity. Fishing, catamaran sailing, and kayaking are the activities done here.

Kothapally Waterfalls: These waterfalls are located in Kothapally village near Visakhapatnam district gradually became popular because of its beauty.

Sankaram Caves: Buddhist caves, monolithic stupas, brick monasteries, and sculpted figures are the sights that come in vision when you are at Sankaram caves. It is located 41 km from Vizag.

Dolphin's Nose: This huge rock resembles Dolphin's Nose when seen from the Visakhapatnam beaches. It is 174 meters in height and 365 meters above sea level.

Getting There and Around

Roadways: Being one of the major cities of Andhra Pradesh and the East Coast of India, Visakhapatnam has a vast roadways network. Vizag is connected to the National Highway 5 (NH5), which is NH 16 now, connects Chennai and Kolkata, it is the part of the Golden Quadrilateral system of Indian Highways. Andhra Pradesh State Road Transport Corporation shortly termed as APSRTC, runs buses to different parts and places of the city. It is a state-owned corporation, and the inhabitants of the city use this bus service with all the buses running on their respective routes. These have different route numbers, which make it easy for the passengers to board on the right bus. The buses run to different places, namely; Vijayawada, Guntur, Kadapa, Kurnool, and many more.

Railways: Visakhapatnam railway station originally called Waltair railway station before 1987 is administrated by the East Coast Railway of Indian Railways. It is also the headquarters of the Waltair Railway division. It locates on the Chennai Central Howrah Station route. The rail network of the city links with many major junctions in the state and outside the state boundaries, as well.

Metro Rail: The people of Vizag are facing significant issues of traffic jams on the streets. To resolve this problem, the GVMC of Greater Visakhapatnam Municipal Corporation has planned a Metro Rail project. With the financial help from JICA or the Japan International Cooperation Agency, the first phase of the Visakhapatnam Metro Rail is supposed to be completed by 2018 December.

Seaports: The Visakhapatnam port is the gateway waterway for Andhra Pradesh. One of the country's largest port and the oldest & shipyard belongs to the Vizag seaport. It is on the East Coast of India. Vizag's shipyard is the largest in the country, and the Gangavaram Port is the deepest in India.

The festive season in Visakhapatnam arrives between the months of November and January. First comes one of the biggest festivals of India; Diwali followed by many other festivals full of lights, color, beauty, mythology, and faith in God. All this continues till the mid of January. Some of the most popular festivals celebrated in Vizag are:

Chandanotsavam: Apart from other festivals celebrated in winters, Chandanotsavam or Chandana Yatra is celebrated in the months of March and April. It is an annual festival which is held in Simhachalam at Sri Varaha Lakshmi Narasimha Temple. On this auspicious day, the devotee's visit temple gets to see the idol in its original appearance. Throughout the year, the icon is kept covered with sandal paste. On Chandana Yatra, the layer of ''Chandana'' which means sandal, is changed as a big sheet of the old layer is taken off, and the idol is covered with the new layer of sandal paste.

Lumbini Festival: An annual festival celebrated in the month of December, it is conducted by the government to honor Buddhism. Every year this festival starts on the second Friday of December and continues for three days. All the sites related to Buddhism are decorated, and the ancient culture of Buddhism is depicted through paintings, sculptures, etc.

Navy Day: Thousands of people gathered at the Beach Road to view and experience the glory and charm of the Navy where navy ships, different weapons, guns, and naval artifacts are exhibited, and this day is celebrated with great honor and pride.

Visakha Utsav: This festival is celebrated in the month of January, and it showcases the culture and heritage of Vizag. It is an annual festival that the government of Andhra Pradesh organizes. It includes the culture of Andhra Pradesh as well. It starts from the 3rd Friday of January and stretches for three long days. Cultural programs, food fairs, exhibitions, fashion shows, and sports events are the charm of the celebration.

The days are pleasant (30ºC) in winters, and temperature at night (16ºC min at the height of winters) is also comfortable. The not so sunny and hot weather makes the site seeing an enjoyable and pleasing task. Major festivals are also held during the months of November to January, so winter is the best time to visit Vizag. October to March is said to be the peak season for tourists to visit.

Summers: From March to June, Vizag experience summers. The sun shines very brightly, and the weather is mostly scorching as the maximum temperature goes beyond 33ºC and the minimum temperature recorded is 26ºC

Winters: Winters extend from December to February and are much more relaxed. The weather is pleasant, and the maximum temperature reaches up to 31ºC and falls a minimum of up to 21ºC.

Visakhapatnam is also a destination for many International and National sporting events as it has many prominent and world-class stadiums for both outdoor and indoor sports.