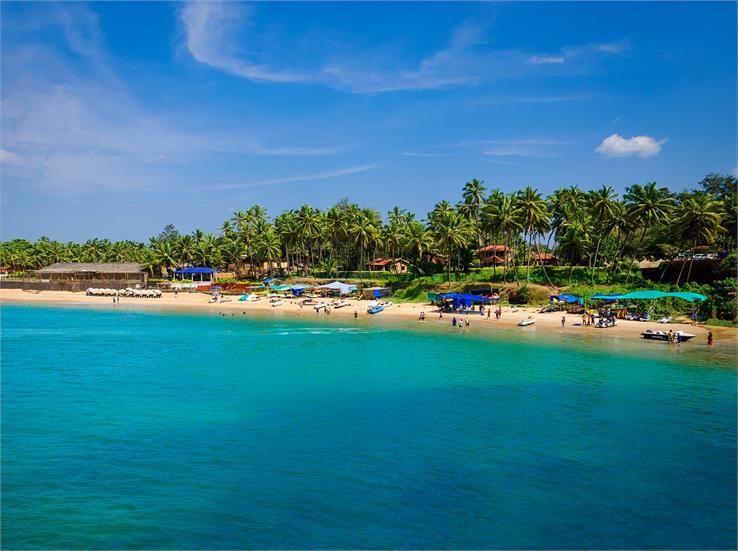 Spending time around the beaches teeming with lush green coconut trees spreading their shadow over the lavishing golden brown sand, with the beautiful views of people making fun in blue oceanic water - completing a picture of its own, is not a bad idea to make the best out of your holidays and that too is possible within India, in Goa. Located in the southwest region, Goa is the smallest state of the Indian union, encompassing an area of 3702 sq. km. Konkani and Marathi are widely speaking languages in the state, while English is mainly used for official and educational purposes. Goa, a former Portuguese province is bounded by the state of Maharashtra to the north, and by Karnataka to the east and south, while the Arabian Sea forms its western coast. Panaji is the capital city of Goa and Vasco da Gama is its largest city.

The history of Goa has been showered through a drizzling array of rulers from Ashoka’s Mauryan empire in the 3rd century BC to the long-ruling Kadambas in 1054 AD; from the Muslim Delhi Sultanate to Bahamani Sultanate and then the arrival of Portuguese in 1510 who remained in existence for about 450 years. The Portuguese resisted India’s 1947 independence from Britain and it was not until 1961 when the Indian army marched into Goa, then after almost five centuries of Portuguese occupation finally came to an end in the subcontinent. Today Goa enjoys as an independent state with highest per capita incomes and literacy rates, but still, we can find the legacy of Portuguese almost everywhere in the state’s scores of old mansions, its cuisine, its churches and in its language which can be evidenced from the historic city of Margao.

The Center of Attraction

Goa is visited by large numbers of international and domestic tourists each year for its beaches, places of worship and world heritage architecture. It also has rich flora and fauna, owing to its location on the Western Ghats range, which is classified as a biodiversity hotspot. The state of Goa is divided into three sections: North, Central and South Goa, each has its own importance.

Central Goa: Technically an island, the beautiful Panaji inhabiting in Central Goa, there are two areas which have been declared as heritage precincts – Fontainhas and Campal.

North Goa: The area from the Maharashtra border to the Mandovi River, is the North Goa province. In this region, the beaches start and lie to the northern end like Terekhol/Keri, Arambol, Mandrem, Morjim, Vagator, Anjuna, Baga, Calangute, Candolim, and Sinquerim.

South Goa: This region is better than North Goa due to its less-crowd, broad beaches and lack of frenzy. Beaches in South Goa are Bogmalo, Arossim, Majorda, Betalbatim, Colva, Benaulim, Varca, Cavelossim, Mobor, and Palolem. The sights worth-seeing are Margao, Vasco Da Gama, and Marmugao Port.

Goa has more than 33% of its geographic area under government forests (1224.38 km²) of which about 62% has been brought under Protected Areas (PA) of Wildlife Sanctuaries and National Park. 56.6% of the geographic area is under private forests covered with a large tract of cashew, mango, coconut, etc. The Western Ghats, which form most of eastern Goa, have been internationally recognized as one of the biodiversity hotspots of the world. Goa's wildlife sanctuaries boast of more than 1512 documented species of plants, over 275 species of birds, around 48 kinds of animals and more than 60 genera of reptiles.

Goa's state animal is the Gaur, the state bird is the Ruby Throated Yellow Bulbul, which is a variation of Black-crested Bulbul, and the state tree is the Asan. Goa's forests are rich with medicinal plants. Foxes, wild boars, and migrating birds are found in the jungles of Goa.

Feast of the Three Kings: Celebrated on the 6th of January in which boys re-enact the story of the three kings bearing gifts for Christ.

Shigmotsav of Holi: It is Goa’s version of the Hindu festival Holi.

Sabado Gordo: Celebrated in February/March, as a procession of floats and street parties on the Saturday before Lent.

Carnival: It is a four-day festival kicking off Lent, celebrated in March.

Fama de Menino Jesus: Celebrated on second Monday in October, in which Colva’s Menino Jesus statue is carried in a solemn procession around the church.

Feast of Our Lady of the Immaculate Conception: Celebrated as fairs and concerts around Panaji’s famous church.

Goa has outstanding dining options that include Italian, Mediterranean, Middle Eastern, Oriental, and of course, North Indian - inviting every type of visitor, nationals or internationals, on a single gourmet‘s table. Goa’s own cuisine, famous across the world – Vindaloo, Xacuti, Balcoha, and Bebinca is taken as a dessert. As the state was once a permanent residence of Portuguese, Goan cuisine is a tantalizing fusion of Portuguese and South Indian flavors. Seafood is taken as a staple in Goa. The traditional Goan drink is feni, a double-distilled fiery liquor made from the cashew fruit or palm toddy.

Sitting under the beach shacks, combining great ambiance and delicious food with views of the ocean is a different experience of its own.

Getting there and Around

Bus: Plenty of long-distance interstate buses - both ‘government’ and ‘private’ operate to and from Panaji, Margao, Mapusa, and Chaudi, near Palolem. Long-distance buses can be standard, air-conditioned, Volvo and sleeper.

Train: Goa has two rail lines — one run by the South Western Railway and the other by the Konkan Railway. The line run by the South Western Railway was built during the colonial era linking the port town of Vasco da Gama, Goa with Belgaum, Hubli, Karnataka via Margao. The Konkan Railway is the main train line running through Goa, runs between Mumbai and Mangalore. The biggest station in Goa is Margao’s Madgaon station, other on the line include Pernam for Arambol, Thivim for Mapusa and northern beaches, Karmali for Panaji and Canacona for Palolem.

Sea: For those who are going for the business purpose, there is Mormugao harbor near the city of Vasco which handles mineral ore, petroleum, coal, and international containers. Much of the shipments consist of minerals and ores from Goa's hinterland. Panjim, which is on the banks of the Mandovi, has a minor port, which was used to handle passenger steamers between Goa and Mumbai till the late 1980s.

Local: For roaming around Goa, you can take hired forms of transport which include unmetered taxis and, in urban areas, auto rickshaws. Another form of transportation in Goa is the motorcycle taxi, operated by drivers who are locally called "pilots". Other than buses, "pilots" tend to be the cheapest mode of transport. River crossings in Goa are serviced by flat-bottomed ferry boats, operated by the river navigation department.

The literacy rate in Goa according to the 2011 census is 87%, with 90% of males and 84% of females being literate. All schools come under the Goa Board of Secondary & Higher Secondary Education. There are also a few schools that subscribe to the all-India ICSE syllabus or the NIOS syllabus. Goa University, the sole university in Goa, is located in Taleigão and most Goan colleges are affiliated to it. There are colleges offering pharmacy, architecture, and dentistry along with numerous private colleges offering law, arts, commerce, and science. There are five engineering colleges and one medical college in the state. Goa Medical College provides medical training and is the largest hospital in Goa. In 2004, BITS Pilani inaugurated its second campus, the BITS Pilani Goa Campus, at Zuarinagar near Dabolim. There are also two National Oceanographic Science related centers: the National Centre for Antarctic and Ocean Research in Vasco da Gama and the National Institute of Oceanography in Dona Paula. In addition to the engineering colleges, there are government polytechnic institutions in Panaji, Bicholim, and Curchorem, and aided institutions like Father Angel Polytechnic in Verna and the Institute of Shipbuilding Technology in Vasco da Gama which impart technical and vocational training.

Goa is India's richest state with a GDP per capita two and a half times that of the country as a whole. It was ranked the best-placed state by the Eleventh Finance Commission for its infrastructure and ranked on top for the best quality of life in India by the National Commission on Population based on the 12 Indicators.

Tourism is Goa's primary industry: it handles 12% of all foreign tourist arrivals in India. In 2010, there were more than two million tourists reported to have visited Goa, about 1.2 million of whom were from abroad. As of 2013, Goa was the destination of choice for Indian and foreign tourists, particularly Britons. Goa also stands 6th in Top 10 Nightlife cities in the world in a National Geographic Book. Goa has two main tourist seasons: winter and summer. In the wintertime, tourists from abroad (mainly Europe) come to Goa to enjoy the climate. In the summertime (which, in Goa, is the rainy season), tourists from across India come to spend the holidays.

Goa is rich in minerals and ores and mining forms the second largest industry. The Marmagao Port accounts for over 39% of India's Iron Ore exports. The leaders in the Goan Iron Ore industry include Sesa Goa and Dempo. Goa is also notable for its low beer, wine, and spirits prices due to its very low excise duty on alcohol. 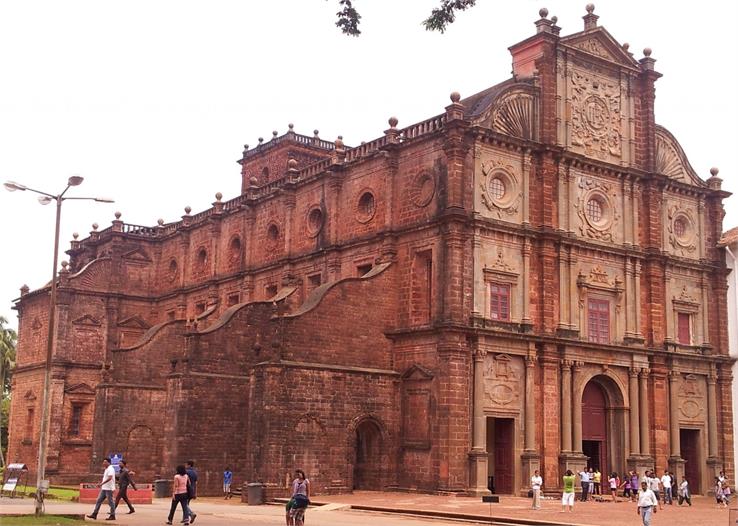