Mussoorie – the Queen of Hills

Mussoorie is a municipal board and a famous hill station in the Dehradun district of Uttarakhand. It is situated in the foothills of Garhwal Himalayan range. The green hills and varied flora and fauna attract millions of visitors to this place, every year. This fascinating hill resort is a perfect vacation spot for international, as well as domestic travelers.

Mussoorie is located at an elevation of 2,005.5 m (6,579.7 ft) and is called “Queen of Hills.” Its elevation makes it more surreal and gives visitors a time of their life by just looking at the beauty of the atmosphere around them. Giving a splendid view of extensive Himalayan snow ranges in the northeast, glittering views of the Doon Valley, with Roorkee, Saharanpur, and Haridwar to the South, Mussoorie is nothing short of a fairyland.

Mussoorie is famous not only for its beauty but also for its development as an important center for education and business in India. It is also famous for the Lal Bahadur Shastri National Academy of Administration which helps in the training of officers for the Indian Administrative Service and the Indian Police Service.

Mussoorie was discovered by Lt. Frederick Young of East India Company in the year 1827. He discovered the place on one of his hunting trips and was amazed by the beauty of this place that he decided to build a holiday resort, here. Lt. Young was the one to raise the first Gurkha Regiment and planted the first potatoes in the valley.

In 1832, Mussoorie became a ground for the Great Trigonometric Survey of India, which began at the southern tip of India. The Surveyor General of India at the time, George Everest, wanted to build the new office of the Survey of India based in Mussoorie but was declined and the office was rather established in Dehradun.

Mussoorie became more accessible in 1900 with the railway coming to Dehradun, which shortened the road trips to 21 miles (34 km).

It is said that Mussoorie got its name from the indigenous shrub 'Mansoor' that is only found in this area.

For the first time, the Central Tibetan Administration of the 14th Dalai Lama was established in Mussoorie during the 1959 Tibetan Rebellion, before it was moved to its present location in Dharamshala, Himachal Pradesh.

Summer season: Mussoorie experiences summers from April to June. Because of the high altitude, the hill resort escapes the extreme heat of the summer season and remains pleasant and warm. The temperature tends to rise to a maximum of 30°C, and the minimum temperature is going till 10°C. The summer months experience a lot of visitors and tourists. However, carrying a few woolens is highly recommended if traveling in this season.

Monsoon season: Mussoorie experiences monsoon from July to September. Heavy downpour is expected at this time, and it makes the roads unsuitable for trekking and driving. With the onset of the spring season in end-September, Mussoorie unleashes its true beauty. Lush green vegetation seems to dance with joy and a new life.

Winter season: Mussoorie experiences winters from late October to mid- February. The entire atmosphere remains cold and spine-chilling. The temperature is expected to drop down to a minimum of 1°C during the nights. Days remain slightly foggy, with the sun being mild and calm. The maximum temperature reaches 10°C during the daytime. Sometimes, occasional snowfall might lead to road-blocks in winters.

Although it depends on the preference of visitors, the highly recommended time to visit Mussoorie is from April to June and September to November.

The nearest airport to Mussoorie is Jollygrant Airport Dehradun at a distance of 60 km. A taxi or bus could be easily found to reach your destination.

The nearest railway station to Mussoorie is Dehradun Railway Station at a distance of 36 km. The rail network connects all major parts of India to Mussoorie. A taxi could be easily hired to reach your destination.

Buses from various locations like Delhi, Haridwar, Dehradun, Chandigarh, etc. are readily available. The option of hiring a car or taxi or taking one's car to Mussoorie is not at all a bad idea if prepared enough for a road journey.

Being a famous tourist destination, Mussoorie offers numerous options when it comes to a place to stay. From 5-star hotels to regular resorts and cottages, you’ll find everything in this heaven of a place. The accommodations make sure that you have a great time inside out. Few of the places that can be considered to have a pleasant and peaceful stay, within your respective budget, are:

Mussoorie has a mix blend of cuisine. Chinese, Tibetan, Indian, Thai, Moroccan, Italian, Goan, and every other global cuisine can be easily found in this place. Mussoorie offers a wide range of platter and a special local cuisine that will leave your taste buds amazed and baffled at the same time. Do not forget to try out cakes and muffins at your favorite bakery. Apart from the bakery, the famous local dishes of Uttarakhand found here are:

Few of the most appreciated places that are worth giving a try to get a new taste are: 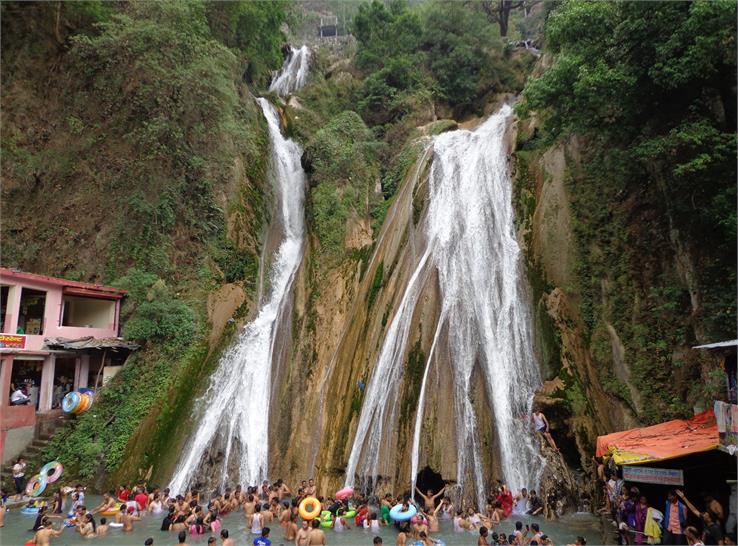