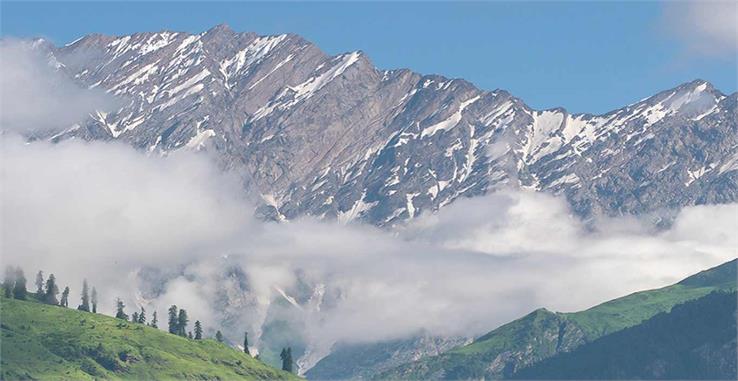 One of the topmost tourist states on the Indian land, Kullu-Manali, invites tourism from the nooks and the corners of the world because of its significant beauty. Its high mountain peaks, its traditional and cultural heritage, a local ethnic flavor which could be traced in its festivals. Its costumes and its delicacies can mesmerize you. Resting on the western bank of the Beas Valley, it is tremendously popular, not only with the tourists from foreign lands but from the aboriginal populace as well.

First mentioned within the Hindu epic The Mahabharatum as 'Kuluta", this city was initially shaped by Mukhtar, the son of Vidura. Historically, this pristine hill station is of great pertinence since it was absolutely recognized as a vital town throughout times of yore. Handed from one ruler to the other, it has been a politically conflicted but naturally excellent place to capture India's essence.

Surrounded by deodar and pine forests, located between the lower and the great Himalayan ranges, as well as the inner Himalayan ranges of Pir Panjal, Kullu and Manali are ever conjoined because of their close geographical proximity. However, accurately stating, Manali is a hill station nestled in the mountains of the Indian State of Himachal Pradesh near the northern end of the Kullu Valley at an altitude of 2,050 m. About 270 km north of Shimla, it's location can be identified.

Being a beautiful destination, Manali offers different charms in different seasons. However, the monsoons draw to an end in September, and winter begins to overtake by October. In winter, the temperature can go down to 1 degree Celsius.
From December end to January, snowfall occurs, which adds to its magical scenery. However, during summers, the temperature varies between 10 degrees Celsius to 25 degrees Celsius, which is still considered pleasant by most people’s standards.

The Best Time to Visit

Though uniformly welcoming throughout the year, if visited during summers, it is most rewarding in terms of adventures and exploration of the hill station.

By Air: The nearest airport is Bhuntar, located approximately 50 km away from Manali. Domestic flights connect Bhuntar with Delhi and Chandigarh. People can take paid taxies thereafter to reach Manali.

By Railways: Major railway Station near to Manali is Una in Himachal Pradesh. A narrow-gauge line also runs between Pathankot to Joginder Nagar. One can also leave the train at Chandigarh Railway station and catch a bus from there.

By Roads: The topsy curvy roads of Kullu-Manali amazingly allows one to resort to Self Driving. One can also take a glance at the beautiful glimpses that unfold outside the windows at every turn of the street. However, if you are not sure about driving safely through the hills, the expert taxi drivers are always handy!

What to See? - Places to Visit

Kullu Manali has an incredible plethora of visitation spots. From religious and spiritual to adventurous and aesthetic, this idyllic “Valley of Gods” illustrates the diversity of culture and traditions through the various interesting sight-seeing alternatives it proposes. Some of the most frequented places at Kullu Manali are:

The religious destinations in Kullu-Manali are most sought after. Mostly situated in high mountains, visiting temples provide a queer combinative thrill of devotion and happiness.

What to Buy? - Shopping in Kullu-Manali

Experience of an outing is obviously incomplete if one does not have a testimony of having visited a place. Kullu-Manali, rich in natural resources, is one hill station wherein the authenticity and purity of the products speak for themselves. Given below are few of the multiple things one must surely get a grab of if one happens to make a trip to Kullu-Manali:

With incredibly high fertility rates, an abundance of maize and wheat crops, gorging on Kullu-Manali’s food items is an experience in itself. Rich flavors, local taste, and mouthwatering tint, Kullu-Manali treats the tourists with its delicacies. The appetizing dishes get etched in one’s memory as one devours them. Some of the must-try food items are:

Without festivities and annual/seasonal fairs, one cannot envisage Kullu–Manali. Round the year, one or the other occasion, cultural, agricultural, or otherwise, is celebrated with great enthusiasm. And this is the major attraction of this hill station. It is a refreshing break away from the monotonous city life! Some of the famous festivals/fairs that are popularly enjoyed are:

Activities for Day And Night

With the windy atmosphere and steep pathways, Manali invites adventures and sports. Being one of the most oft-visited hill-stations of Himachal Pradesh, Kullu valley, and Manali Hill Station never lets the possibilities of excitement exhaust. One can spend time interestingly by engaging in the following activities:

At night, one can either opt for a random stroll across the scenic valley or can spend some romantic moments (Kullu-Manali is, after all, the favorite of Honeymoon – goers) at:

Where to Stay? - Accommodation

To spend a relaxing and luxurious time at Kullu-Manali, one has to be a bit generous with the expenditure probably. But, most of the hotels’ services assure you of excellent hospitality and takes adequate care for the customer’s comfort. It’s not too expensive an affair, after all!

The best hotels to look out for in Kullu-Manali are:

So much for Manali’s beauty and its exciting and captivating aspects! Its impeccable serenity can actually be not wholly conveyed through words. One has to feel it through senses and enjoy it with spirits to know what a heavenly location is it. Various film directors have shot their movies in Kullu-Manali - it speaks volumes about the extent of it’s exotic and mesmerizing dimensions. So, what are you waiting for? Pack your bags and gather the moments of peace, thrill, and spirituality all at once. Where? Of course, in Kullu-Manali. There is assuredly no alternative to this magnetic ‘Awe.’