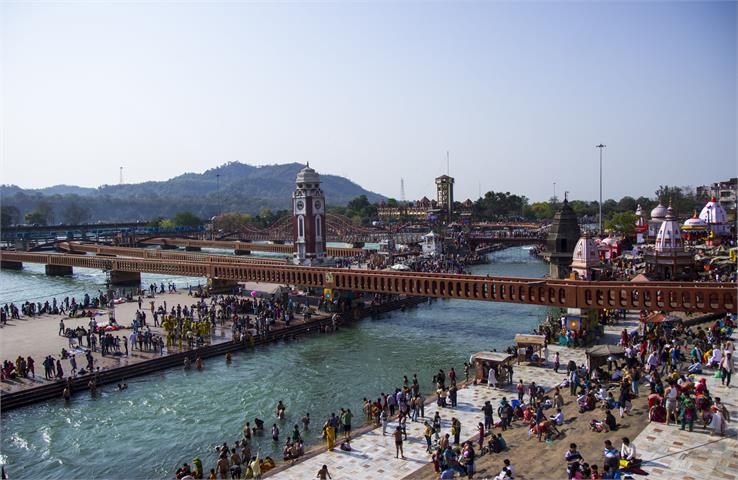 Haridwar - The Gateway to Gods

Haridwar (also spelled Hardwar) is an ancient holy city and municipality in the Haridwar district of Uttarakhand. It literally means the gateway to God (Hari=God, Dwar=Gate). It is the place where the holy river Ganga enters India after originating from the Himalayas and covers a distance of just 253 km (157 mi).

Haridwar is regarded as one of the seven holiest places in Hinduism. Haridwar is the place that hosts Kumbh Mela once in every twelve years. It is the time when millions of pilgrims, devotees, and visitors reach Haridwar to perform holy/ritualistic bathing on the banks of the river Ganga. It is believed that bathing in Ganga during this time rinses away all the sins and bad omens of a person and helps them attain Moksha (the final release).

It is believed that during Samudra Manthan, a few drops of Amrit (nectar of mortality) spilled over Haridwar, Ujjain, Nashik, and Prayag (Allahabad) from the pitcher which was carried by the celestial bird Garuda. In Haridwar, the spot where Amrit fell is Brahmakund, which is located in Har ki Pauri (footsteps of the Lord).

Har ki Pauri is the most sacred ghat of Haridwar. It is also the primary center of Kanwar pilgrimage from where millions of devotees gather sacred water of the river Ganga and carry it across hundred miles to dispense the offerings to the shrines of Lord Shiva.

Haridwar, being a holy pilgrimage, is still a well-developed city. It has schools, hospitals, factories, large industries, and many startups with huge buildings and workshops. Haridwar is also a center for learning various arts and cultures. It is a great source of Ayurvedic medicines and herbal remedies. Several Indian teaching schools called Gurukula are situated in many parts of Haridwar. Gurukula Kangri Vishwavidyalaya is providing unique teaching in the Gurukul system since 1902.

Haridwar has always been a center of research as it is one of the oldest living cities in India. It has numerous temples with incredible tales. It is one of the best places in the country for trekking, rafting, and many other adventurous activities.

Haridwar is also the place where people take the ashes of their deceased family members and depart in the river Ganga, praying for the salvation of their souls.

Haridwar is also called Hardwar by different Hindu believers, and both the names have a different meaning.

Haridwar: As per experts, ‘Hari’ means Lord Vishnu and ‘Dwar’ means gate or gateway, which implies that Haridwar means “Gateway to Lord Vishnu.” As per the devotees of Lord Vishnu, to reach Badrinath (one of the four Char Dhams), with a temple of Lord Vishnu, Haridwar is a typical place to start a pilgrim's journey.

Hardwar: In Sanskrit, ‘Har’ means Lord Shiva and ‘Dwar’ means gate or gateway, which suggests that Hardwar stands for "Gateway to Lord Shiva." For centuries, Hardwar has been the starting point of a pilgrim's journey in order to reach Mount Kailash, the eternal abode of Lord Shiva. This is the reason why ‘Har ki Pauri’ (footsteps of Lord Shiva) is the most sacred site in Hardwar.

There’s another account that claims that Haridwar is also the same place where Devi Sati used to live in the palace of her father, Daksha.

In ancient times, Haridwar was also called Gangadwar, the place where the river Ganga descends to the plains.

King Bhagiratha, the great-grandson of Suryavanshi King Sagar (ancestor of Lord Rama), did penance in Haridwar for many years. Impressed from his dedication, Lord Brahma asked for a wish, and he asked for river Ganga to flow down from heaven to earth, for the salvation of his 60,000 ancestors who were affected by the curse of saint Kapila. Lord Brahma accepted his wish and river Ganga agreed to descend down to earth. That’s when King Bhagiratha salvaged the ashes of his ancestors. Since then, the tradition of departing the ashes of deceased family members in the holy water of river Ganga is being followed.

It is also said that Lord Vishnu left the footprints on one of the stones that are set in the upper wall of Har ki Pauri, which is touched by the Ganga, all the time.

Haridwar was ruled by the Mauryan Empire in 322-185 BCE and was acquired by Kushan Empire from the 1st to 3rd century. The existence of terracotta culture between 1700 BCE and 1200 BCE has been proven by archaeologists.

The modern account of Haridwar was found in Chinese records when eminent Chinese traveler Huan Tsang visited India in 629 AD., while King Harshavardhan was ruling. In his journal, he mentioned Haridwar as ‘Mo-yu-lo’, remains of which are still kept safe in Mayapur.

On 13 January 1399, the city was invaded by Central Asian conqueror Timur Lang. In 1504 AD, the first Sikh Guru, Guru Nanak, took a holy bath in Kushawart Ghat on the day of Baisakhi. In the 16th century, Haridwar was dominated by Mughal emperors. During his rule, Mughal Emperor Akbar asked his writer Abul Fazal to write about Haridwar in Ain-e-Akbari. In the journal, a lot of things were mentioned about Haridwar, including that Emperor Akbar used to drink water from the river Ganga and called it ‘the water of immortality’. He used to carry this water wherever he went.

Raja Man Singh of Amber laid the foundation of present-day Haridwar and also renovated the ghats at Har ki Pauri. It is also believed that after his death, his ashes were also immersed at Brahma Kund. Being one of the oldest living cities, Haridwar is mentioned in more or less every sculpture and scriptures.

The Bhimgoda dam, built in the 1840s, is one of the two major dams on river Ganga. The dam caused a lot of deterioration to the river but was used heavily by the ships of East India Company.

In 1901, the city had a population of 25,597 and was a part of the Roorkee Tehsil in the Saharanpur district of the United Province. In 1947, Haridwar became a part of Uttar Pradesh.

Later, Haridwar became part of Uttarakhand (then Uttaranchal) on 9 November 2000.

A large part of the district has forests around. For wildlife and nature preserve, Haridwar has Rajaji National Park within the bounds of the district.

Haridwar is situated 314 m above the sea level, between Shivalik Hills in the North and Northeast and the Ganges River in the South.

In Monsoon: Haridwar faces heavy rainfall during the month of July to September. The rainfall is, however, a relief from the scorching marks that the summers left. But the river Ganga gets a little unsafe with the rise in water level and speed. Taking a holy dip during this time is not advisable as the water level becomes unexpected and the banks become very slippery.

In winters: The winters are exceptionally cold and chilly in Haridwar. During the months of October to February, the water and atmosphere get really cold and the temperature can fall down to 4°C. The only advantage of this time is the beautiful fog that makes every view exceptionally awesome.

Top Places to Visit in Haridwar

Haridwar has a good network of rails and roads. It is just 200km away from Delhi, the capital of India. Although Haridwar is always welcoming and ready to serve visitors, it is advised to avoid visiting Haridwar during the Hindu month of Sawan (around July) as it a holy month and most of the roads/highways are blocked and hotels/buses/trains remain overcrowded. There are many ways to reach Haridwar:

The nearest airport to Haridwar is Dehradun's Jolly Grant Airport, 20 km from Haridwar. Take a cab/bus to reach your destination.

The nearest railway station to Haridwar is Haridwar Junction Railway Station and has hotels/resorts at a walking distance.

Visitors can either travel by their own vehicle or hire a bus. The bus service is highly operated to commute from North India to Haridwar. Check before boarding the bus.

There are many highways connecting important parts of India to Haridwar. Those with their private vehicles are advised to use a suitable map that gets you through a shorter and easier way.

Haridwar is one of the famous pilgrimages of India and when it comes to souvenirs, it provides a vast variety. One thing that every visitor takes away with them is the holy water of the river Ganga. Haridwar is famous for souvenirs like handicrafts, carved stone idols, jewelry, kitchen set toys made of stone, brass and copper materials at wholesale price, and much more. A few of the famous markets of Haridwar are Moti bazaar, Upper Road, Jwalapur, and Kankhal.

You can also shop from the Government Handloom and Handicrafts Emporiums as well as the Gandhi Ashram, where you can get a range of hand-woven clothes, handicrafts, and more ethnic items.

Haridwar is a purely vegetarian city. In vegetarian food items, one can get a handful of options at famous outlets. One cannot underestimate the delicious food items found on the roadside food stalls. Few of the best places to eat from are:

Haridwar, being a tourist place, has an abundance of options when it comes to hotels. Apart from luxury hotels, the place also has ashrams and dharamshalas, that glorify the simplicity of life and wakes you up with prayers and music. They are cheap and affordable. Few of the hotels/ashrams/dharamshala that could fit any pocket are: