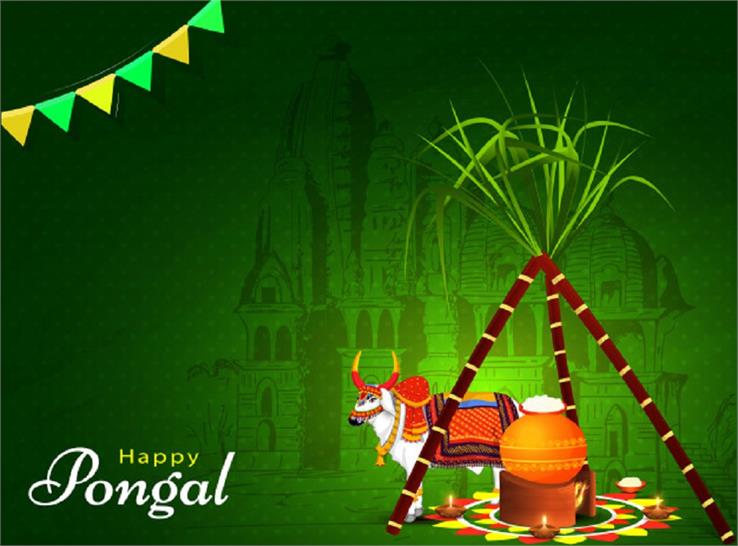 The Festival of India | Pongal

Pongal is a harvest festival celebrated in the state of Tamil Nadu with great enthusiasm. This festival is celebrated for four long days and filled with traditions and rituals. By rejoicing this festival, people thank Mother Nature for giving them a good harvest of crops like Rice, Cereals, Sugarcane, and Turmeric. It falls in the month of Thai i.e., January-February. Pongal falls on the 14th or 15th of January, every year, and Tamilians say, "Thai Piranthal Vazhi Pirakkum "the birth of the month of Thai will pave the way for new opportunities".

Traditionally, it is the month of weddings too.

The first day of the festival is celebrated as Bhogi. Lord Indra, the supreme ruler of the clouds that control the rains, is worshiped and paid homage so that he gives a good harvest and brings prosperity to the fields and land.

Bhogi Mantalu is celebrated by making a bonfire out of wood and cow dung cakes, and all the useless things of the household are thrown in the fire, around which girls dance and sing the folk songs and people have fun.

The second day of Pongal is full of rituals and worship. People worship the Sun God and offer him boiled rice in milk in an earthenware. The turmeric plant is tied around the pot of rice pudding. Two sugarcane sticks, bananas, and coconuts are also offered to God during the puja or the worship. A bright and auspicious design is made early in the morning after bathing before the house with white lime powder; it is called “Kolam.”

Mattu Pongal is the third day of the festival, which dedicated to cows. The cattle are decorated with flowers, tinkling bells, and colorful clothes. They are worshiped by the people of Tamil Nadu and fed with Pongal (the rice dish).

There is a story behind this cattle puja. It is said that once Lord Shiva asked Basava, his bull to go on earth and ask to eat food once in a month, whereas to take an oil massage and bath every day. But Basava made a mistake and asked Nashwar to take a bath and oil massage once a month while having food every day, due to which Shiva became enraged, and he cursed Basava for all his life to stay on earth and help humans in plowing. That’s why on this day the cattle are worshiped.

Cattle races are also held as a festive activity on this day.

Knaus and Kaanum Pongal is the fourth day of the festival. On this day, all the leftovers of Pongal and Venn Pongal, plain rice and rice colored red and yellow, betel leaves and betel nuts, pieces of sugarcane are kept on a washed turmeric leaf which is kept in the courtyard.

Women of Tamil Nadu perform this ritual before having a bath in the morning. They perform this so that her brother and his family prosper and grow. They make Kolam in front of their houses.