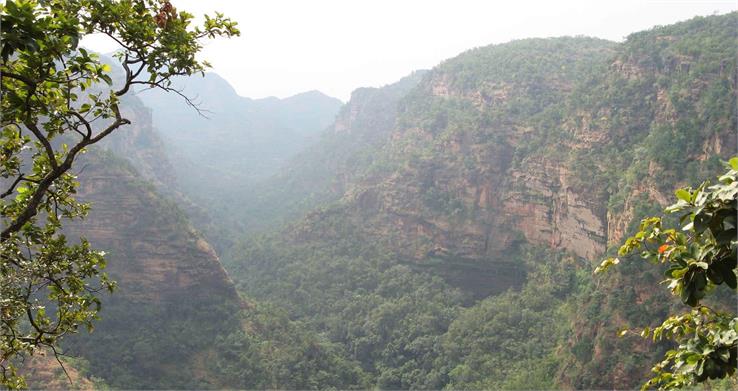 Pachmarhi - The Queen of Satpura

Pachmarhi is a hill station in the Hoshangabad district of Madhya Pradesh. During British rule, the area was made the location of a cantonment (Pachmarhi Cantonment) and has remained the same since. It has been nicknamed “Satpura ki Rani” (Queen of Satpura) because it is situated 3,500 ft (1,067 m) above sea level in the Satpura range. The Dhupgarh is the highest point in Central India and it is located in Pachmarhi only.

Pachmarhi is the only hill station located in the central region of India. It doesn’t fail to prove itself a must-visit hill station-its elevation from sea level, streams, waterfalls, picturesque views and wildlife makes it a perfect spot for those looking for a peaceful retreat with nature.

Pachmarhi comes under the Pachmarhi Biosphere Preserve, which was created in 1999 with a purpose of linking two forest reserves and Satpura National Park into a larger wildlife conservation area. It has a lot of cave paintings in the forests, some of which dates back to 10,000 years. It is also famous for the five caves that are also called Pandava Caves. Even though the caves are originally Buddhist, but the name persists.

The name ‘Pachmarhi’ is a blend of two Hindi words – Panch, which means five and Marhi, which means caves. It is believed that these caves were built by the five Pandava brothers of Mahabharatha era while they were in their exile for thirteen years. The caves are situated on a hilltop and provide an excellent vantage point.

Pachmarhi was discovered during the British rule, by Captain James Forsyth of the British army. It was announced a hill station in 1857 and became a sanatorium for British troops in the Central Provinces of India.

In 1901, the population of Pachmarhi was 3,020 and got doubled during the hot summer months. Pachmarhi also served as the summer capital for the Central Provinces.

Pachmarhi is home to a much rare variety of plants and animals. In 2009, UNESCO added Pachmarhi Park to the list of Biosphere Reserves. The Pachmarhi Biosphere Reserve covers 4981.72 km2 of the land, covering parts of three districts Hoshangabad (59.55%), Chhindwara (29.19%), and Betul (11.26%).

The climate of Pachmarhi is mild and generally remains warm and pleasant. Summers are, comparatively, much pleasant with rainfall and mild wind. The rainfall averages 2012 mm.

Pachmarhi has a prominent quality of forests that reach their best in the summer. The place is full of famous fruits like mangoes, jamuns (Indian Blackberry/Java Plum), and custard fruits. Some of the rare local fruits that are grown here are khatua, tendu, chunna, khinni, and chaar. The forest also serves various usual as well as rare medicines.

Pachmarhi is the highest and only hill station in Madhya Pradesh. It is home to many high peaks and spots that attract millions of visitors every year.

It is the highest point of Satpura ranges which is situated at an elevation of 1352 m. It is highly famous for giving a perfect view of sunrise and sunset.

At night, people can stand on the peak and look at the lit uptown, full of lights. The sky is so clear that you can watch millions of stars and all the constellations from one spot. During the day, the view of the lush green valley mesmerizes every onlooker. It is a perfect spot for hiking.

It is the third highest peak in Satpura ranges, at an elevation of 1067m. It is widely known for a moderate trekking trip. It is also famous among the pilgrims as it has a temple of Hindu Deity Lord Shiva on top of it. The Chauragarh fort, built by king Sangram Shah of Gond dynasty, is a must-watch. Climbing 1365 stairs to watch a sunrise is the best decision you’ll make.

Pachmarhi is a heaven for nature lovers. Apart from a rare wildlife, lush green forests, mountain peaks, and a rich biosphere, Pachmarhi also has water streams and waterfalls that will make everyone fall in love with the place.

Commonly known as ‘Jamuna Prapat,’ Bee Hill and Bee Falls is one of the most famous waterfalls in Pachmarhi. If you listen to the sound of this waterfall from a distance, it resembles same as a bee. That’s why it’s called Bee Hill and Bee Falls. It is surrounded by dense forests and beautiful views. It provides main supply of drinking water to the whole Pachmarhi. Tourists prefer visiting the bathing pool right above the waterfall.

It is one of the most beautiful waterfalls but is located in a remote area. This 100 m long waterfall can be reached after a difficult 4 km hike from Reechgarh. The way to this waterfall is extreme, with steep inclinations. Visitors need a permit from Bison Lodge to reach here.

It is one of the cleanest and natural freshwater in Pachmarhi. It is surrounded by dense forest.

Officially known as Rajat Pratap falls, Silver Falls comes 2800+ feet roaring down. It is called Silver Falls because when the sunlight falls on it, it shines like a thick silver line. The route to Silver Falls is through dense forests and slippery roads.

These mountain caves have fresh water dripping from the insides. The ecosystem works just perfect here. Mountains soak-in freshwater during autumn and fed the same to streams in the rest of the seasons. This is a very famous cave among the devotees of Lord Shiva.

It is one of the most famous and visited places in Pachmarhi. This mountain stream creates a beautiful natural water pool, cascades, and waterfall in its course. This 'fairy pool' is shallow and deepens only towards the base of the fall to make up for a perfect holiday spot with kids. Stories suggest that British women used to bath here, giving the impression of fairies to the locals.

The majestic land of Pachmarhi can be reached by many ways.

The nearest airport to Pachmarhi is Bhopal airport or Raja Bhog Airport which is 195 km away from Pachmarhi. Taxis and cabs are always available to take you to the spot.

Pachmarhi, being a popular tourist retreat, gives away many options for survival. You’ll find many hotels nearby the market area. Just 2-3 km away from the bus stand, there are a few peaceful cottages, resorts, and MP Tourism hotels.