The most important and vibrant festival of the Kerela falls at the beginning of Chingam month of the Malayalam calendar, Kollavarsham, and it is the first month as well. It occurs in the months of August or September following the Gregorian calendar.

People celebrate this festival to welcome King Mahabali, an ancient king of Kerela. It is said that the people of Kerela loved their king because during his reign, the kingdom developed, and its prosperity reached another level. But king Mahabali was very arrogant. Despite his popularity, his behavior and arrogance became the cause of the wrath of the gods, which led to the end of Mahabali. But he got a boon from God as a reward of all his good deeds that he would be granted an annual visit to his kingdom to meet his people whom he loved and who loved him too. So, this annual visit of Mahabali’s spirit is made at the time of Onam as a belief of the people of Kerela.

Onam is celebrated with great joy and enthusiasm all over the state and is the famous festival for all communities of Kerela. It shows equality amongst the people.

The grand carnival stretches up to 4 to 10 days. The first day is called Atham, and the tenth day is named Thiruonam, and these two days are the most important days of the festival. The depth and richness of the culture and heritage of Kerela can be observed and felt when the celebration of Onam is in its full flow. Due to its qualities and festivities, in the year 1961, it was announced as the National Festival of Kerela.

The Government of India has declared the time of Onam as the ‘Tourist-Week’ for Kerela. It is having observed the dynamic celebrations of this vibrant festival full of colors, decorated elephants, boats, flower decorations, elegant dances, folk music, and folk songs, daring, energetic games & sports, and a lot more. The Government of India also promotes Onam internationally, which makes it a big occasion!

Kerela depicts the real picture of its rich culture and heritage at the time of Onam. The carnival has its attractions like:

Onasadya: A grand meal served on banana leaves, which consists of 11 to 13 traditional dishes. It is prepared on the last day of the carnival, Thiruonam. Everybody has to sit on the floor to enjoy the feast.

Vallam kali: The ‘Snake Boat Race’ or Vallamkali is the most fun-filled tradition of Onam. The Snake Boats are popular by this name due to their size. Hundreds of people oar the decorated boat and race with each other in the river Pampa. It’s a colorful and rare sight as hundreds of people oaring the boat while singing folk songs that inspire them and delight the viewers.

Festivities and celebrations are incomplete without women, who add the glamour and charm to the spirit of the festival. Making flower decorations, flower mats, Pookalam, which are made in front of the courtyard to welcome their great King Mahabali, are some of the activities performed by them. They also present special dances like Thumbi Thullal and Kaikotti kali. Kummatti kali and Pulikali are the folk performances that add the grace of the grand carnival.

The experience to attend the festival proves to be the visual treat for the tourists to keep as a happy memory in their hearts forever! 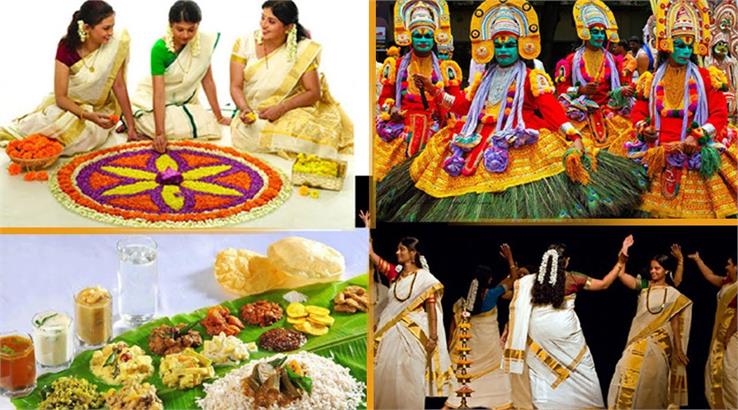