McLeod Ganj - The Town of Spirituality

Located in the suburb of Kangra district of Himachal Pradesh, India, McLeod Ganj is a heaven for all nature and adventure lovers. The hills, valleys, dense vegetation, peace, and serenity is not the only highlight of this place. McLeod Ganj is widely famous for being the home of 14th Dalai Lama, along with many monks, nuns and a huge Tibetan population. The suburb is also known as “Little Lhasa” or “Dhasa” (a short form of Dharamshala). McLeod Ganj is also the headquarters of the Tibetan government in exile.

McLeod Ganj is nothing short of a paradise for those seeking renaissance. The holiness of the place encourages you to close your eyes and take a deep breath with a wide smile on your face. This is a place that makes anyone automatically a fan of meditation, a trek through the dense yet beautiful mountains. The low budgeted spiritual vibes will cleanse your soul from any type of stress and negativity. Enjoy watching thousands of visitors coming every year to volunteer Tibetan activities.

It all started in 1850, during the Second Anglo-Sikh War when the suburb was annexed by the British. Soon, subsidiary cantonments of the troops were stationed at Kangra on the slopes of Dhauladhar, with a Hindu resthouse or Dharamshala. During British rule, McLeod Ganj was one of the hill stations where the British spent hot summers. But, around the late 1840s, the town started to get overcrowded and the British had to shift their troops to two regiments to Dharamshala.

The British Viceroy of India, Lord Elgin, was so obsessed with McLeod Ganj that he even suggested making it the summer capital of India. On 20 November 1863, while on a tour to McLeod Ganj, Lord Elgin died on his way to Dharamshala. As per his wish, he has buried at the St. John in the Wilderness at Forsyth Ganj, a little below McLeod Ganj.

Viceroy Lord Elgin’s summer residence Mortimer House was acquired by Lala Basheshar Nath of Lahore but was later occupied by the Government of India. Ultimately, the Mortimer House became the official residence of Dalai Lama. By 1905, the twin towns Forsyth Ganj and McLeod Ganj became important centers of trade, commerce, and official work of Kangra District.

Just when the town saw accomplishment, a horrendous earthquake of 7.8 magnitudes hit the town on 4th April 1905, which destroyed most of the town. 19,800 people lost their lives and thousands were injured. Most of the buildings were destroyed, including the famous Bhagsunath Temple. The town took another half-century to recover from the loss.

McLeod Ganj gained most of the publicity in the year 1959, when the 14th Dalai Lama Tenzin Gyatso took shelter in India, after a failed uprising in Tibet, against the communist party of China. The government of India provided refugees to him and thousands more Tibetan refugees and Dalai Lama formed his own Government of Tibet in exile. McLeod Ganj is home to many Buddhist monasteries and has since evolved into an important tourist and pilgrimage destination.

The town of spirituality can be reached by air and rail networks.

The nearest airport to McLeod Ganj is Kangra Airport, which is 15kms from Dharamshala.

The nearest railway stations on Kangra Valley Railway line are at Kangra and Nagrota, which are about 20 km south of Dharamshala. The nearest railhead (broad gauge) is at Pathankot (85 km).

The most important source of income of McLeod Ganj is Tourism.

Where To Shop From?

McLeod Ganj is famous for its exotic collection of articles. Be it handicraft, garment, carpets, or other souvenirs. The town has everything that you’d cherish all lifelong. And if you’re good at bargaining, you’ll get a deal of your life. Use your skills to buy local items like Tibetan mats and carpets.

The jewelry and handmade painting collection is one of the rarest luxuries here and makes up for a perfect gift for someone special. You can explore the markets mentioned below to get a perfect memory of a perfect place:

One cannot miss trekking in McLeod Ganj. The hills shout for being explored and promise to give an adventurous and memorable experience. There are many service providers and tour organizers who can help you with exploring the mountains. Following is the list of famous trekking spots that you MUST explore:

Been to McLeod Ganj, but didn’t try the exotic dishes that can only be found at a place like this? Do not make the mistake of missing the traditional dishes of the spiritual town, and we bet you’ll remember it for your whole life. The places that you MUST explore in search of the real Tibetan taste are:

Tired from the trip? Need some rest at a peaceful and worth place? Do not worry. McLeod Ganj has a place for everyone. From budget-friendly to luxurious hotels, McLeod Ganj has it all. The best part about this town is its hospitality and cheap rates that welcome everyone with the same gesture and warmth. Find the most prominent yet best places to stay in McLeod Ganj, without burning a hole in your pocket: 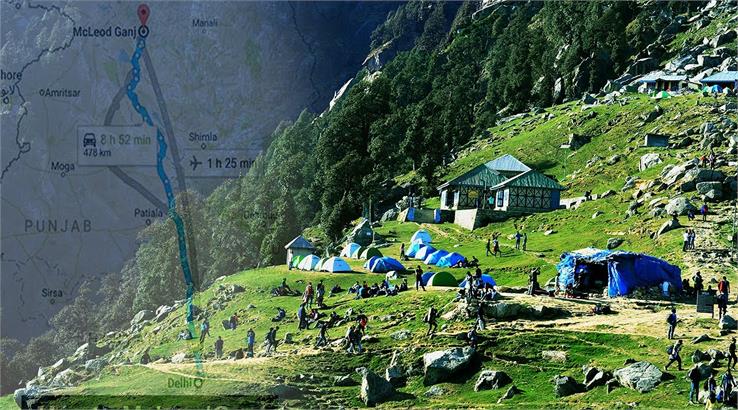