The only haven of Asiatic lions, the land which has given birth to legends like Kannad - the father of Atomic Theory, Mahatma Gandhi, Dhirubhai Ambani, Gujarat is situated in the west of India and bounded by the Arabian Sea. The state is renowned for its ancient archaeological sites, historic architecture, natural beauty, religious places, sparkling beaches, age-old forts, havelis, temples, wildlife sanctuaries, colorful cultures and a tradition of hospitality blended with modern amenities. It is a seventh-largest state with an area of 1,96,024 sq. km including a population of 60.4 million. Gujarat is the major industrialized state commencing the modern sculpture with the touch of old age tradition. Most of the people speak in Gujarati but Hindi, Urdu, Sindhi, and English are also spoken in Gujarat. The women prefer wearing a lot of ornaments and perform Garba which is their folk dance.

Gujarat - the state derives its name from 'Gujjaratta' the land of the Gujjars, a tribe migrated to India in 5th century AD but some archeological sites like Lothal, Dholavira of the Indus Valley Civilization makes fall of a number of mighty Muslim rulers and the Marathas till the British set up their first Indian trading base at Surat on Gujarat’s coast in about 1614. It is from Gujarat that Gandhi launched its non-violence protest against British rule accompanied by fasting and ending with 390 km Salt-March, which drew the attention of the world and stimulated anti-British sentiment across India. After Independence, eastern Gujarat became part of Bombay State but in 1960, Bombay state was divided on linguistic lines into Gujarati-speaking Gujarat and Marathi-speaking Maharashtra.

Gujarat is a success story state (SSS) of India engaged with the whole sole keys. It is a typical state featuring the flavors of expecting the unexpected. Narendra Modi (Prime Minister and face of India); his effective and efficient strategies to boom the Indian economy by projecting the expertise comes from the roots of Gujarat. Dhirubhai Ambani, one of the major success stories of Gujarat whose strength and smart business techniques listed his efforts in almost every business channel and starred him as one of the successful business tycoons of India. Down to earth and quick to respond behavior of Gujaratis triggers their identity as the strong market holders. The extraordinary willpower and the sharp strategic perceptions of its people are the hidden secrets of Gujarat's success and growth.

Relish yourself in Gujarat

Gujarat is the jewel of Surat, Ahmedabad Metro, Vadodara, Rajkot, Junagadh, Jamnagar, Bhuj, and Ahmedabad Rural. The main tourist hubs of Gujarat are engaged with Ahmedabad - the Manchester of India, Gandhi Ji's Sabarmati Ashram, Statue of Unity (recently erected in 2018), Spectacular peninsula of Saurashtra, Somnath temple in Junagadh district (one of the 12 jyotirlingas), the historic Jain temple of Palitana, Sasangiri - the last natural habitat of majestic Asiatic lions, the coastal towns of Porbandar, Dwarka the semi-inland of Kutch and the capital of Lord Krishna’s kingdom and Udyog Bhavan, etc. The state is well furnished with all the modern equipment, infrastructural facilities and services like commerce, medical, communication, transportation, connectivity, hospitality to make it tourists-friendly.

You can take a forest safari in search of Asia’s only wild lions at Sasangir Wildlife Sanctuary.
Go looking for Indian wild asses on the flat salt plains of the Little Rann of Kutch at India’s largest Wild Ass Wildlife sanctuary.

For the bird lovers, the state incorporates one of the largest water bird sanctuaries, Nalsarovar Bird sanctuary.

Our Festivals Our Culture

Jalebi, fafda, chidki, khaman dhokla, khakhra are the identities to the Gujarat sweetness. Sweetness can not only be noticed in food but also in the air and thoughts of Gujaratis. The dry and extreme moderate climate with the surrounding beaches intermingle with the sweet and amiable atmosphere of Gujarat so well that you can visit any time at any place from October to March and enjoy the surrounding nature.

Your visit to Gujarat remains incomplete unless you do some shopping. In Ahmedabad, prime shops are in areas like C.G. Road, Ashram Road, Law Garden, and Relief Road. The state claims rich tradition of handicrafts, villages of Kutch are famous for handicrafts of textiles, apart from beadwork, tie-and-dye, embellished mirrors, block-print, sequins, shells work, marriage costumes, wall hangings, embroidered, appliqued quilts, cradle clothes, cloth toys, embroidered footwear, lacquer furniture, curios, bandhnis, and traditional ghagra-cholis are amazing, provided with the facility of both plastic and paper currencies that are widely accepted throughout the state.

Gujarat witnesses the best proximity features for tourists, apart from an international airport at Ahmedabad, Gujarat has its own 10 domestic airports which connect it to the rest of India. Gujarat has a good railway network. It is well connected, not only internally, but also to other places in India. Gujarat has a better road network which makes Gujarat easily accessible.

Gujarat has made a significant contribution to the growth of Indian Economy via agricultural as well as industrial production. The major agricultural produce of the state includes cotton, groundnuts (peanuts), dates, sugar-cane, milk & milk products. Industrial products include cement and petrol. Gujarat maintains a variety of industries, the principal ones being general and electrical engineering and the manufacture of textiles, vegetable oils, chemicals, soda ash, and cement. The world's largest ship breaking yard is in Gujarat near Bhavnagar at Alang. Reliance Petroleum, one of the group companies of Reliance Industries Limited founded by Dhirubhai Ambani operates the oil refinery at Jamnagar which is the world's largest grassroots refinery. Gujarat ranks second nationwide in gas-based thermal electricity generation with a national market share of over 8% and second nationwide in nuclear electricity generation with a national market share of over 1%.

Gujarat is one of the most popular states in the country for tourists with an annual footfall of 44.8 million tourists (2016-17). ‘Khushboo Gujarat Ki' campaign by Amitabh Bachchan has grown tourism in Gujarat by 14 percent, twice that of national growth rate. Moreover, recently opened 'Statue of Liberty' dedicated to Sardar Vallabhbhai Patel is the world's tallest statue and it has alone drawn around 2.9 million visitors since its inception (31st October 2018). 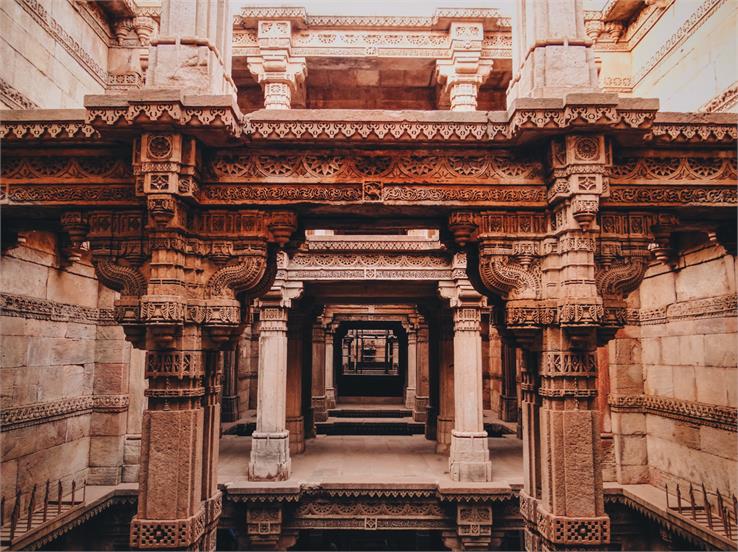