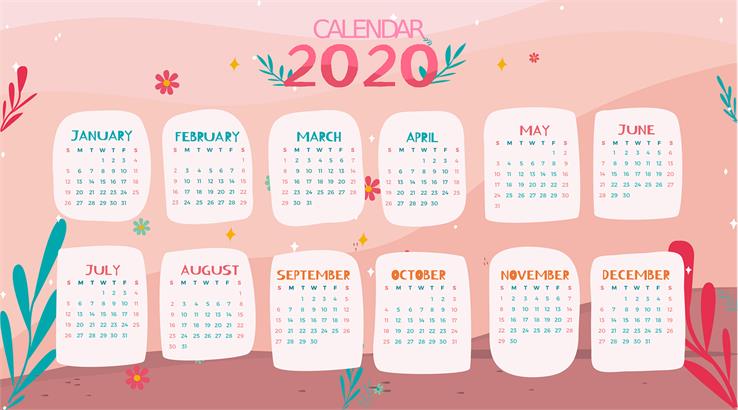 Is everyone excited to welcome New Year 2020? What would it hold for everyone? One must have already planned resolutions and goals for the upcoming year.
According to Gregorian Calendar, which is followed worldwide, a new year’s day starts from January 1. It marks the beginning of the new year and ending of the previous year. Let’s check it out what special days and celebrations this year 2020 will bring for everyone.

12 Months of the Year

January, the month of new beginnings with celebrations, marks the onset of the New Year. It brings new hopes, new opportunities, new dreams, new resolutions, and new goals with new ideas.
The month January named after Janus, the Roman deity of beginnings & endings. He is known as the God of gateways and doorways. The month of January is a door to a new year and new beginnings with joy and happiness. So let's make this New Year 2020 with delight, joyful, peaceful & graceful and check out what the month January is bringing for you!
Astrological Sign: Capricorn (till 19th) & Aquarius (20th→)
Birthstone: Garnet

February, the shortest month of the year is full of Love & Emotions. It is the second month of the year. The month of February was titled after the Roman god Februus. However, the name February designates from the "Februa." "Februa" is the Roman festival of Purification in which people ritually bathed.
Astrological Sign: Aquarius (till 18th) & Pisces (19th→)
Birthstone: Amethyst

March is the 3rd month of the year, which comes along with the beauty & happiness of the spring season. The title of March comes from God "Mars", who is known as the Roman god of war or battle.
Astrological Sign: Pisces (till 20th) & Aries (21st→)
Birthstone: Aquamarine, Bloodstone & Jade

The 4th month of the year April is known as the month of Humor. The April month named after the Latin word "aperire" which means "to open." It is just like flowers do in summers. The Romans denote the month of April as Aprilis.
Astrological Sign: Aries (till 19th) & Taurus (20th →)
Birthstone: Diamond and Crystal

The 5th month of the year, May was titled after the Roman name "Maia." Goddess Maia is known as the Goddess of growing plants.
Astrological Sign: Taurus (till 20th) & Gemini (21st →)
Birthstone: Emerald

The hottest month of the year June is renowned as an auspicious month to get married. According to history, thousands of years ago, the ancient Romans named the month after the goddess Juno. Goddess Juno was believed as an angel of marriage. Juno was always available for the well-being of women.
"June" name also originates from the word "Juvenis." The Latin word "Juvenis" denotes for young people.
Astrological Sign: Gemini (till 20th) & Cancer (21st→)
June Birthstone: Alexandrite, Pearl, & Moonstone

The seventh month of the year, July is named after Roman general Julius Caesar and comprises of 31 days. The month of July brings thick and wet blanket of clouds, hence monsoon hits the most of India (also known as Varsha Ritu).
Astrological Sign: Cancer (till 22nd) & Leo (23rd→)
Birthstone: Ruby (symbolizes contentment) and Onyx

Named in honor of Augustus Caesar, August is the eighth month of the year with the total number of 31 days. August is a very cheerful month as it brings monsoon (Varsha Ritu) and celebration for Indian people. Of course, it also marked a very special day in the history of India, yes we are talking about “Independence Day.”
Astrological Sign: Leo (till 22nd) & Virgo (23rd→)
Birthstone: Peridot

September is the ninth month of the year with a total number of 30 days. The word September comes from 'Septem' which means ‘Seven’ in Latin, it was named during a time when the calendar year used to begin with March. The month calls for autumn season which is also known as “Sharad Ritu” in India. It is the time when hot and humid weather begins to fade.
Astrological Sign: Virgo (till 22nd) & Libra (23rd →)
Birthstone: Sapphire

The tenth month of the year (31 days), October is the holiday season in India as it is full of festivals. The month is also the onset of winters or pre-winters, also known as Hemant Ritu (in Hindi). While it starts to snow in Ladakh and Uttarakhand in North India, the retreating monsoon hits Tamil Nadu and Kerala.
Astrological Sign: Libra (till 22nd) & Scorpio (23rd →)
Birthstone: Opal and Tourmaline

With a total of 30 days, November is the eleventh month of the year. The tourist season begins with November in India as the temperature starts falling and rain is finally over. It embraces significant festivals and fairs in the nation.
Astrological Sign: Scorpio (till 21st) & Sagittarius (22nd→)
Birthstone: Topaz and Citrine

December, the last and twelfth month of the year brings different vibes in the country. It comprises of 31 days. The chilly winters in the North and West and warm in South calls for tourism all around, especially for Christmas and New Year celebrations.
Astrological Sign: Sagittarius (till 21st) and Capricorn (22nd →)
Birthstones: Turquoise & Blue Topaz