The bonfire harvesting celebration of Punjab is known as the festival of Lohri - a symbol of new beginnings. Like other main festivals of India, Lohri is a public holiday and celebrated with pomp and grandeur across the country. It is celebrated more in the northern province of the country.

When do we celebrate Lohri?

This festival is celebrated after sunset on the first night from Magha Sankranti, which is said to be the last day of Hari Paush.

Festivals are the pride of India. Each province has its special celebrations. One of these is said to be Lohri. Lohri is one of the main festivals of Punjab province and is celebrated with great fanfare. Lohri splashes start several days in advance. Festivals like Makar Sankranti in Central India, Pongal festival, and Kite festival in South India are observed during this time in the country. Principally, all these festivals are celebrated together with family members, which end the mutual hatred.

Lohri is considered as a time of joy for the farmers. Grains start swaying in the fields, which resemble pleasant weather. Lohri is celebrated together with family and friends. In this way, this festival aims to increase mutual unity.

History Legends behind the occasion of Lohri

Based on the Puranas, it is celebrated every year by remembering Sati as a sacrifice. According to the story, when Prajapati Daksha had despised Lord Shiva, husband of his daughter Sati by not including his them in the Yajna. Due to this, his daughter immolated herself to Agni (fire). The same day is celebrated as repentance, gifts are given to married daughters and also being invited to the house. During the occasion, the items of makeup are distributed to all married women.

There is another historical story behind Lohri, which is known as Dulla Bhatti. The story belongs to the reign of Akbar; those days, Dulla Bhatti was the Sardar of Punjab province, also called the hero of Punjab. There was a place called Sandalbar, which is now a part of Pakistan. Girl trafficking was held there on an enormous scale. Dulla Bhatti then opposed this and respectfully saved the girls from this misdeed. He also gave them a dignified life by getting them married. On this day of victory, songs of Lohri are sung, and the following rhyme remembers Dulla Bhatti:

It is also said that this festival is celebrated in memory of Loi, wife of Saint Kabir.

Due to these mythological and historical reasons, the festival of Lohri in Punjab province is celebrated with gaiety.

How do People Celebrate Lohri

Lohri is considerably one of the main festivals of Punjabis, which is celebrated with great enthusiasm. Dance like Gidda and Bhangra, songs and dhols are the pride of Punjabis; without these, their festivals seem incomplete.

Youngsters and children start singing songs of Lohri. Brave martyrs are also remembered in these folk songs, in which the names of Dulla Bhatti are primarily remembered.

Gajak, Revdi, Peanuts are eaten on the occasion of Lohri, and special feasts are organized. "Sarso ka Saag" and "Makki ki Roti" are especially eaten and loved by everyone.

Farmers these days bring their crops home with great enthusiasm and celebration. Lohri is celebrated as the farmer's new year in the province of Punjab and Haryana. This festival reflects the happiness and joy of farmers.

Significance of bonfire in Lohri

On the evening of Lohri, After burning the sacred fire, people dance around it. They offer peanuts, kheel, maize seeds to the fire. While sitting around the fire, many sing songs, play games, enjoy eating corn, peanuts, and sweets.

Lohri is linked to village, crop, and weather of Punjab. Radish and sugarcane crop is sown from this day. Before this, the Rabi crop is cut and kept in the house. Mustard flowers are seen waving in the fields. The life of a farmer depends on the production of these crops, and when the fruits of the season come to the houses, festivities are celebrated with great enthusiasm. On this occasion, everyone enjoys the farewell of winters as well.

A modernized form of Lohri

In the Modern Era, Lohri's splashes remain the same. However, the celebration has taken in the form of parties and high-end get-togethers.

The festival of Lohri is celebrated with full enthusiasm. Consequently, Lohri is also observed overseas; the shine and glory of Lohri are on its peak, especially in Canada. 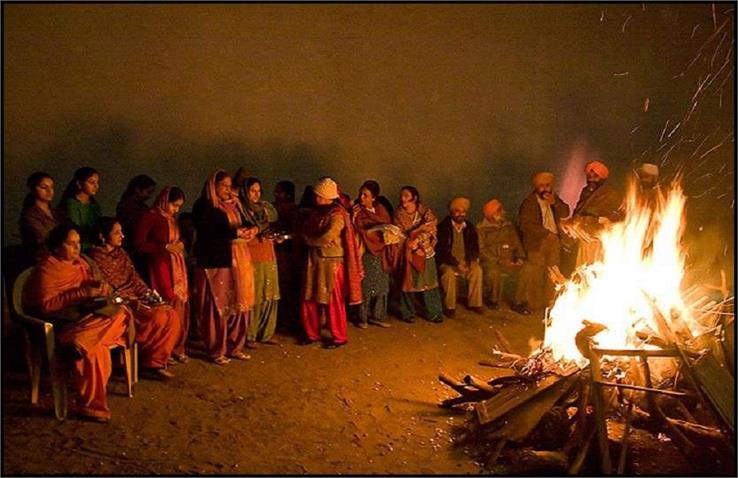